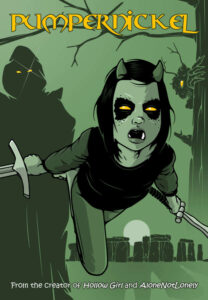 Back in May, Luke Cooper put out his latest title in the form of the Graphic Novel known as Pumpernickel. Which is the story of Rebecca ‘Pumpernickel’ Turner, who is something of a miracle baby for her parents. Only, the truth is she’s a Changeling who was switched at birth with the real Rebecca Turner and after a number of years in the normal world, those like her want her back. Something she’s not entirely enthused about for obvious reasons and hey, who can blame her? She’s got it going pretty good after all! Its neat/interesting that Luke chose to explore the concept of the Fae/Changeling folktale regarding switching children at birth here in Pumpernickel and the path that could potentially take in later years and is something we get to see as I mentioned earlier. And if you remember how Luke had a certain color scheme going in AloneNotLonely, we see something like that here in the pages of Pumpernickel as well.

Only a lot more green instead of red in this instance and a little yellow as well. Now, despite how young she is, Pumpernickel proves she’s not one you should underestimate as she will kick ass and its something her birth mother later finds out after she forces the issue of Pumpernickel coming back. And mother dearest certainly learns that you shouldn’t let Pride and a desire for Power over ride everything else. The ending for this story could be considered ambiguous given its got a bittersweet air to it and it makes sense given that most original fairy tales don’t really have happy endings. How things play out in the future between Pumpernickel and her parents now that all’s been said and done is something I’m curious about and can’t wait to see how Luke will handle that when the time comes. If, for whatever reason you haven’t checked this out by now, I highly recommend you do so. Though I do warn you that Pumpernickel is only available in digital format.

Summary: Rebecca Turner is a miracle. Not expected to make it to her first birthday, Rebecca is now approaching eleven years old. Sure, she’s a little weird but her parents love her all the same.

Except they aren’t really her parents because she’s not really Rebecca Turner.

She’s a changeling called Pumpernickel, swapped with the real thing ten years earlier by the Hidden People who now want her to come home and are having trouble taking no for an answer.

But Pumpernickel likes living as a human and loves her adoptive parents. She therefore has no intention of leaving and will protect her stolen life by whatever means necessary, fair(y) or foul.

From the imagination of Luke Cooper, creator of Hollow Girl, AloneNotLonely, Figments and A Glimpse of Hell, and artist on the award-winning GoodCopBadCop, Wolf Country and Burlap: Death Waits for No One, Pumpernickel is a twisted modern fairytale that tells us that family is about more than just blood, no matter how much gets spilled.