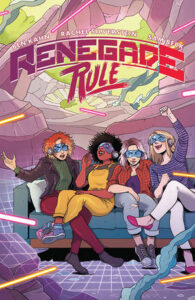 After having read and thoroughly enjoying Renegade Rule as I did from start to finish, I am kicking myself for not having read this much sooner after I was initially sent a copy courtesy of Ben Kahn (Ignatz-nominated, baby!) themselves some months ago. Renegade Rule also served as a great way to be introduced to the writing talents seen here by Ben Kahn and Rachel Silverstein and I definitely want to experience more of their writing. Renegade Rule is the story of the Manhattan Mist (Great name by the way), a 4 person group of women that spend a lot of their time in virtual reality games. Namely, Renegade Rule, which pits teams of 4 against one another. The Manhattan Mist is comprised of Sasha (who seems to have a huge chip on her shoulder and we kinda see why later), Tonya (who I can relate too when it comes to having confidence issues where women are concerned), Jessie (who is the team sniper and makes use of a cone in one Hell of an interesting way during a match), and last but not least, Amanda. The team Captain and like Jessie, something of a bad ass.

Unfortunately, Amanda also has some issues of her own where her mother’s health is concerned. Which is a huge driving force for this young lady when it comes to playing Renegade Rule due to the chance to win some prize money. Prize money she could use to help where her mom is concerned. I can relate to worrying a lot about parental health myself and I like the fact Amanda isn’t letting this prevent her from doing things like Renegade Rule with her friends. Of course, her mother would probably be disappointed if she wasn’t doing stuff like that! Despite some of the seriousness of the book, the humor, the action, and the interactions between the characters through out it are all things I heavily loved/enjoyed. Even sparking laughter several times as I read through Renegade Rule. Sam Beck and Jim Campbell also did amazingly well as part of the creative team here and I can only assume that Sam also covered coloring duties as well. I also love how ultimately, there’s not much in the way of bad feelings and instead, we see friendly competition between the teams.

Which is proof you don’t need drama to keep a story interesting, even with some of the things said between characters, there’s never really any bad feelings whatsoever. Every character gets their chance to shine and its great to see, even when they are feeling awkward as can be and Ben and Rachel capture that so well in my view. I think I can easily say that this trade ranks as part of my top reads of the year and as part of my over all top reads in comics in general. Renegade Rule also features a huge amount of representation where the LGBTQ + Community is concerned, along with POC representation. Which some might scream forced Wokeness or whatever but that’s far from the case in my view. The Glonor in this book is real and I highly recommend this to everyone. Hell, I may even see about adding this to my collection since I enjoyed it so much!

Summary: The Manhattan Mist have beaten the odds to land themselves in the national championships for Renegade Rule, one of the hottest virtual reality games in existence. But they’re in for competition fiercer than they ever imagined, and one team member’s entire future could be at stake. Four queer female friends will have to play harder than ever against self-doubt, infighting, romantic distraction, and a slew of other world-class teams if they hope to become champions.

From Ignatz-nominated writer Ben Kahn, debut author Rachel Silverstein, and artist Sam Beck is a celebration of friendship, competition, queer identity, and the insane things we do for the things and people we love.