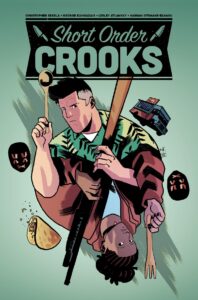 Short Order Crooks is an idea that probably shouldn’t work but you know what? It does, it really FREAKING does. Who knew that the Food Truck industry had such a shady underbelly? Not me that’s for sure but I sure as heck do now! Rockwell Granger’s had a misspent life thanks to a bad decision or two and dealing with the Bardems is just another in the line of bad decisions. But when you have a dream you want to follow like he does where cooking is concerned, sometimes going through bad routes like the Bardems is the way to do it. Even if its not the smartest thing to do due to the amount of trouble you could find yourself in if things don’t go a certain way. Every single member of this book’s creative team did a fantastic job, from the serious to the rather zany shenanigans that occur a time or two. Like chasing after a Pirate themed Food Truck for example and that whole storyline is goofy but really enjoyable with some seriousness too for good measure.

Of course, ol’ Rocky would’ve been just fine not knowing something like that existed! But… Hey, that’s the Bardems and money troubles for ya! Now I’m curious if what the Bardems are up too is actually known by the Police or if they’ve somehow managed to avoid notice. Especially with the smokescreen they’ve clearly set up to make those in the Food Truck scene believe in what they. The Bardems have also clearly perfected the ‘I’m a nice guy but I’m also a ruthless fella’ vibe too. And then there’s Harper Maybury, a young girl with some mystery about her! But despite that, she and Rocky pretty much become a great duo thanks to the fact she practically upgrades his Food Truck with her own brand of cooking despite something of a rocky start. Something I think a number of folks end up fairly happy about for that matter! I really love this book, even if there is something of a bittersweet tone after all’s said and done for Rocky and Harper.

Which is something I’m honestly hoping Christopher and the team will explore in the future as I’d love to see what led to the way things ended. And if whether or not it makes Rocky spiral. Short Order Crooks is available on October 20th!

Summary: Rockwell Granger put his misspent life on the line in pursuit of cooking for a living…and it’s not going well. In debt to the notorious Bardem Brothers, who control the Portland food cart scene with an iron fist, he struggles to make a profit and fights with the few customers he has.

When the Bardems call in his marker and force him to track down a rogue truck invading their turf, Rock has no choice left but to say yes. Meanwhile, Rock’s taco truck has been invaded by his newest (and only) employee, Harper Marbury, who took backseat driving to a new level, replacing his menu with her vegetarian agenda. As Harper polishes her cooking skills, she’s thrown into the chaotic food cart underground, helping Rockwell on his morally gray mission for the Bardems.

With two jobs on their plate, Rock and Harper will have to learn how to get along, and, even harder, how to cook together, as they navigate a world of food pirates, evil hippies, and irate foodies, before Rock gets 86’d forever.