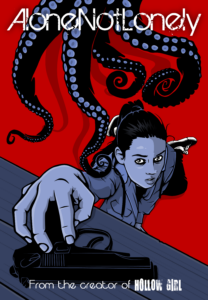 First off, I will say right off the bat that I am ABSOLUTELY loving the red/blue/black color scheme this latest offering from Luke Cooper has within its pages. Its just absolutely fantastic and gives off a great vibe of living in a Post Apocalyptic world filled with horrific Lovecraft styled monsters. AloneNotLonely features our young leading lady by the name of Alex, an introvert surviving in a Post Apocalyptic world. One who won’t hesitate to shoot your ass considering the dangers of this world and how all that happens is a complete mystery thanks to the fact Luke doesn’t go into detail about it. Which is fine as there’s always the future for going into that sort of thing as for now, the important thing is the focus on Alex herself. I find it pretty interesting and neat that Luke combined Post Apocalyptic shenanigans with a character that is introverted as I can’t quite recall seeing something like that in the past. Of course, the fact there’s quite a bit of PA material out there in the world now a days, its possible I’ve missed it.

Or the character was just a side character and not part of the main focus and again, being something to miss because of that. And since Alex is an Introvert, we learn a lot about her through her thought processes instead of through spoken dialogue. That’s not to say she’s entirely silent of course as through the story, we see her having to deal with people and some ugly sights straight from Hell. That Alex doesn’t trust easily and is Introverted, you find yourself pretty much suspecting every character she comes across as having bad intentions but at the same time wanting her to find trust worthy people so that she’s not completely alone in this nightmarish world of Humans, Angels, and Demonic beings. 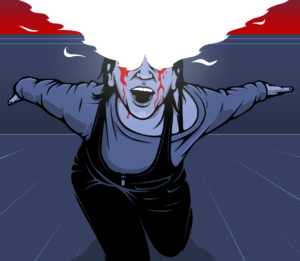 Luke’s facial expressions with characters (thank you first Hollow Girl story!) can say a lot but like in real life, they can still be mis-leading in any event. I also find myself pretty curious on how exactly Alex manages to stay so well stocked in ammunition for her gun! 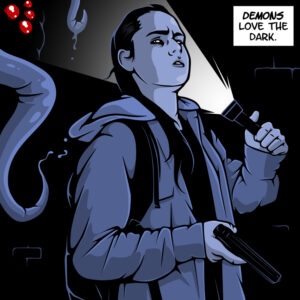 But between that, and the state of things in AloneNotLonely, things may not exactly be as they appear to be as we come to learn by the end of the book. Leading readers to question what is and what isn’t real and how Alex came to personally be in this whole situation. Something I look forward to finding out about if and when Luke continues the story of Alex in AloneNotLonely.

Editor’s Note: Wanting to check out AloneNotLonely yourself? Then head here! Also, stay tuned for a special interview with Luke where we discuss all things AloneNotLonely!

Summary: The only way to be truly safe is to be alone.

“About six months or so ago, the world ended. Or, to be precise, we ended. The world is doing just fine.”

After most of the earth’s population is apparently wiped out, Alex is left alone, but that suits her just fine. Having never been able to trust people anyway, she is perfectly suited for survival in this desolate new world; one in which everyone is potentially a monster, both figuratively and literally.

From Luke Cooper, creator of Hollow Girl, Figments and A Glimpse of Hell, and artist on the award winning GoodCopBadCop, Wolf Country and Burlap: Death Waits for No One, AloneNotLonely is part post-apocalyptic sci-fi and part psychological drama (psy-fi?), a dreamlike (and often downright nightmarish) fairytale for courageous introverts.