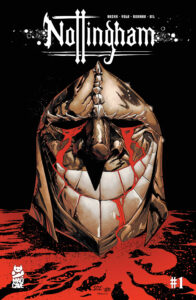 There’s been a lot of interpretations of the infamous character known as Robin Hood and the characters involved over the years, one of which includes a female version known as Robyn Hood over at Zenescope. The character is usually seen as an affable fellow, ready to fight if need be and always willing to steal from the rich so that the poor can have coin to get by where basic needs are concerned. But Mad Cave Studios and David Hazan decide to take the whole concept and turn it on its head with their upcoming offering of Nottingham. Where things are a bit more sinister and laced with a hidden agenda or two, meaning you don’t really know who you should or shouldn’t trust. This take on things is both fun and disturbing considering how Will acts like a fanatical cultish zealot as he does his thing. And his thing is none too pleasant either and makes for wanting to take a walk through Sherwood Forest to be less of a thing.

Shane Connery Volk’s art and Luca Romano’s colors go very well together and definitely succeed in showing the creepy sinister vibe. Especially where certain masks we see in this first issue are concerned! Sheriff Blackthorne is another figure here in the pages of Nottingham who is definitely imposing and not someone I’d want to meet in a one on one situation, or in any situation to be honest! Though I’m curious if he’s deformed in the sense of being something of a hunchback or if its just the way he presents himself due to his clothing? And given he’s got a much different name in this take on things, I don’t know if he’s the Sheriff that Robin Hood typically faces off with in various takes or if he’s just a new variation of one of Hood’s enemies but either way, he’s definitely a problem for Hood! I’m also liking the fact that Maid Marion isn’t just some damsel in distress in this sinister take on things and is still quite foxy (go cartoon references!) in her own right.

That she also doesn’t seem like someone you could trust to watch over your money is another twist I’m liking. I’m very curious and excited to see where things go from here after the events of this first issue, especially with what else Marion gets up too that might cause a big conflict! March 3rd (JAN211424) is when this latest offering from Mad Cave will hit shelves so you have plenty of time to get your pre-order on! And remember… If you’re a tax collector, its best to stay out of this Sherwood unless you want to meet your maker early!

Summary: In this twisted medieval noir, the Sheriff of Nottingham hunts a serial killer with a penchant for tax collectors. The Sheriff’s investigation makes him the target of England’s most nefarious power-brokers. That’s to say nothing of the Merry Men, terrorists lurking amongst the trees of Sherwood, led by an enigma known only as “Hood.”