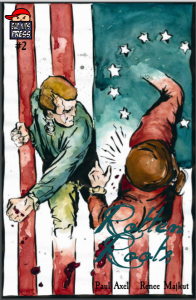 Let’s play catch up shower, Harold Wood, industrialist and beloved icon of Osprey City, Massachusetts is dead.The detective assigned to the case, Mark Robles, is a fresh transfer from Chicago. A journal and several clues have been found which lead Robles to believe that this is a vendetta against the family stemming back four hundred years. So basically what we have is a historical fiction type mystery thriller and a detective that is smart, honest and willing to go the distance to solve a case.

If there’s one drawback to self published books is that sometimes you have to wait a great time frame between issues. Once I started reading the second issue however all of it came flooding back to me and that means the first issue really was good solid stuff and stuck with me. Or I have a freakishly good memory but I’ve decided it’s the former. On the positive side I have to say that the characterization, writing and story advancement seem to have gotten stronger with the second issue. Always nice to see growth in someone and Paul seems to be doing a marvelous job with this and I hope that as it continues that we don’t have to wait as long between issues.

I really do like the supporting cast around Robles, Dr. Adam Markusson for example, the medical examiner in the coroner’s office where this issue opens and he gets his first lead of the day plays out a lot like you’d see in some kind of one hour primetime detective show. Following up on the clues we see Robles put together bits and pieces in his mind and where he goes with it is kind of fascinating. I like that he doesn’t think inside the box and that outside is usually his comfort zone because that means that he’s able to put pieces together like a jigsaw puzzle where you don’t really have a whole picture you just have a couple pieces here and there to work with. 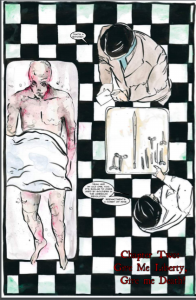 Since most of the family history that we’re learning happened when the British were overtaxing and the colonies were rebelling it’s all very much written in a biased or one-sided kind of way. So that there’s no impartial account of what may or may not have actually happened. But what we do see is a family split by their thinking and a desire for revenge. So who would wait four hundred years to enact this kind of revenge well that’s what Robles needs to find out and I’m hoping in some way shape or form that the supernatural comes into play here because that would send me to the moon. Chances are however it’s just one of the family members using the story and the background to gain control of some vast fortune.

So far two things are clearly evident from the way Paul is telling the story. 1, is that this mystery he’s created is actually kind of fascinating and not one that is able to be immediately figured out and 2, that he’s having one hell of a good time with it. Really the pacing of the story is incredibly good, the way that we got revelations or we learn about the family and how it all ties together while sometimes is left open ended is still interesting to see.

I’m seeing a lot more of this watercolor style artwork in comic books these days and what Renee seems to be doing here its pretty on par with everything else I’m seeing in the industry. So that means it’s got good page and panel layouts, nice attention to detail when it’s necessary but the overall effect is that it there’s a nice sense of mystery going on. Also I really like the differential when we see the past and the colonial time outfits compared to the suits and modern day dress.

Familiar yet different, formulaic yet unique this book has a lot of things you’ll find comfortable and that will definitely stand out. This is one of those examples of why I love self published books it’s really something that ignites the love for the industry.

Editor’s Note: Rotten Roots #2 arrives today! To find out how you can acquire your very own copy, head here! 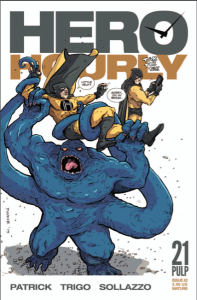 Summary: Everyone has one of those days at work. The one where nothing goes right. Where the copy machine jams or you spill coffee on your pants. Saul’s about to have one at Hero Hourly, and let’s just say it’s not exactly the same.

For those of you who remember how funny or silly the team of blue and gold used to be well then I got news for you this is one of the series you should be reading. It has that kind of irreverent humor that’s missing from today’s market and wild kind of silly at times it really is actually very funny. Yeah the concept is a little out there but in all reality it kind of makes sense and it really works for what is going on here. In a lot of ways so it does remind me of DC back in the day with the Conglomerate and other such titles. So in that regard I think this has a very special place in in the market that hasn’t been filled in quite some time.

There’s something inherently funny about Saul finding his place in this corporation being a superhero on a pay scale or a time clock that actually kind of endears you to his character. This whole concept of this is my last resort I can’t find a job so I’m going to do this but I’m going to do it to the best of my ability kind of thing going on here. 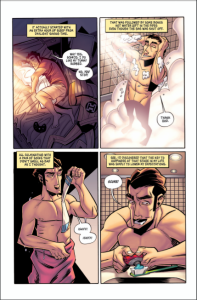 I also like the idea of him being a sell out. His remains constantly rag on him for what he’s doing and he has that whole I work with coworkers who are lazy fat slobs and don’t do their share of the work going on as well. So in many regards this story has a lot to do with real life and the things that normal people go through every day when they find a job that they don’t necessarily want but take and find themselves being pretty good at it. Sometimes life just doesn’t work out the way you think it well and you find yourself in a place that kind of makes you happy and somewhat fulfilled.

Until you work with those people that drive you up the wall and make you want to kill someone.

Then there’s the whole thing with all former trainer / partner is out for revenge for the company having fired him. As well as an old buddy of his finding him a job in his field while the possibility of finding one that comes into play as well. Will he find that his new job is his true calling in life or will he hang it all up and go to the one he got a degree from school for?

I have to admit the way James is writing this is pretty spectacular. Amidst all the absurd humor or circumstances that are interjected to prove that things could be worse and all of it done in this humorous fun way, sliced in with what people go through in their normal daily lives it shows true potential.

Carlos and Alex really help bring in that whole 80’s superhero humor comic fun feel. There’s plenty of emotion there’s plenty of heroic poses and everything just kind of popped off the page with those kind of almost solidly bright colors so you really get that whole fun experience.

It’s nice to know that humor hasn’t gone away and there are places you can find the good stuff like right here.