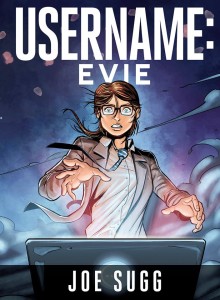 First, I just want to give a huge shout out and thank you to Mindy Lopkin for sending me a copy of this fantastic read. And I mean an utterly fantastic read! Joe Sugg and Matt Whyman essentially had me hooked from start to finish as I really didn’t want to put it down! As I just had to keep on reading to find out what would happen next. Course the only thing I didn’t like about the graphic novel is Evie’s cousin Mallory. Who really needs a good strong kick in the ass in my view of things. This girl just screams spoiled brat vibes and even with the events of the story she could probably slip back into into that role. Though I imagine Evie would have something to say about that if it happened. My dislike of Mallory and the fact I didn’t want to put the graphic novel down shows that Joe and Matt’s writing of this was really well done as they gave it their all instead of half assing it.

I love that Evie’s father is such a good man who put so much time and effort into creating a way for Evie to escape from the realities of life. Even if only for a little while at a time. Which probably isn’t the most healthiest of ways to handle a situation like that but at least it shows how much he cares for his little girl. Plus, escaping into a virtual reality is a whole lot better then hiding in your fridge! Granted, that might help give you something of a thick skin to some degree when it gets freakin’ cold out where they live. And while he spends more time at his computer, you still can’t help but like the guy for what he does for Evie despite his sickness. Sometime after the loss of her father, our gal Evie finds a little gift he left behind for her. 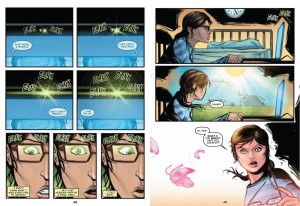 Which is a pretty damn great gift all things considered since it allows her to escape the normal world for awhile. Amrit and Joaquin’s art and colors bring this book to life beautifully and I have to say that Evie herself is pretty darn cute. From the peaceful nature of the reality world to the chaotic nature of things after Mallory shows up was just beautifully done and I am really truly hoping Joe decides to come back to this universe in the future with Amrit, Joaquin, and Mindy along for the ride. 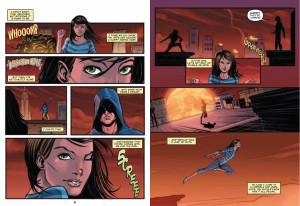 Evie taking a leap of faith!

During a pretty big moment when things are pretty bleak thanks to Mallory’s doing, you have to wonder though about just how much of his own soul that Evie’s father wound up putting into the virtual reality as he created it. The fact he ensured his little girl would have a guide there was a pretty great thing to do as well. Evie’s time in the virtual reality is a great time of character growth for her and I love that the nerdy guy she knows in real life even plays a part in the whole thing without her even really realizing it all that much. 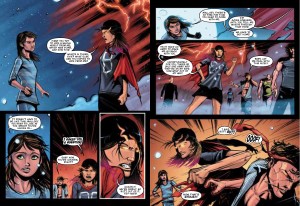 Evie and Mallory having an intense moment!

Though I find myself wondering just how much Mallory’s even really grown by the end of this. But if Joe gives us more we just may see how that goes. Especially where the reboot is concerned that had to happen. I can’t recommend this fantastic read enough and once you’ve read it for yourself I think you’ll see why. The compelling story, fantastic art work and the growth we witness for Evie is something to be seen by as many folks as possible in my view.

Editor’s Note: Interested in checking out this fantastic title for yourself? Then head over to the Facebook page to find out how you can grab up a copy!

Summary: Like anyone who feels as though they just don’t fit in, Evie dreams of a place of safety. When times are tough, all she wants is a chance to escape from reality and be herself. Despite his failing health, Evie’s father comes close to creating such a virtual idyll. Passing away before it’s finished, he leaves her the key in the form of an app, and Evie finds herself transported to a world where the population is influenced by her personality. Everyone shines in her presence, until her devious cousin, Mallory, discovers the app…and the power to cause trouble in paradise.