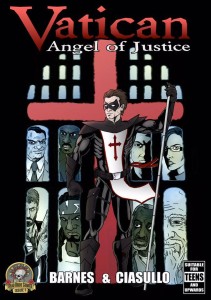 brings to the world his latest creation known as Vatican! Though we kinda got introduced to him somewhat way back when during the first issue of Starlex if memory serves me rightly. But its nice to see him in his own full on story and kicking butt. I can safely say that the lack of origin story in this aside from where he got his training from was pretty nice. Even if the training was kind of a stereotype but it works none the less. I imagine that pretty cute librarian is gonna have a whole new religion after Vatican helps her out of a bind. Though I think that pervert definitely deserved a far worse punishment for what he was intending to try and do to that lady. 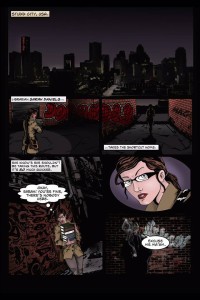 s us to quite a few characters through out this first issue, from good cops looking to take down the Doomsday gang and its cliché as can be leader, a member of said group not liking the way things are (which will probably get him killed), and a corporate douche bag with a minion who reminds me a lot of E. Honda from the Street Fighter film. Only more obedient and not as forceful as E. Honda is. Though that could change as the series progresses if Corporate Douche Bag’s treatment of him gets to be especially tiresome. An action Vatican himself might wind up inspiring the guy to do by going against his boss.

I liked the art and colors seen through out this and I like that Dan had it so that Vatican’s thoughts weren’t seen in the usual way but instead in a black box with white lettering and occasionally a cross being seen as we see his thoughts. Which was nicely done for the boys in blue too. Though the use of an exclamation park during one of the disgruntled thug’s lines of dialogue makes no sense as it shouldn’t be there since the sentence should be a full on one. Other then that, some of the cliches seen, and me having to re-read one scene several times again to better understand what was going on, this was a pretty good first issue and I look forward to seeing whatever happens next when the time comes.

Editor’s Note: Interested in checking out this digital only title? Head right here!

Summary: Priest Thomas Gabriel tries to save his decaying city from endless crime by becoming the masked vigilante known as Vatican.