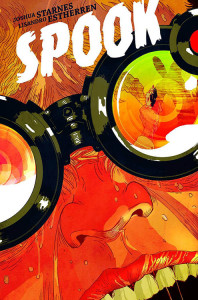 Well I’ll be honest I haven’t read anything from Red 5 in a long time, I used to love Neozoic but haven’t seen that in ages. So when I asked for this opportunity and they said ok I jumped at it and since I don’t research a book before I read it, don’t want to be influenced before hand after all, this was almost what I thought it would be. Since almost only counts in horseshoes and hand grenades the bang on this one was superb! This took me by surprise and now I am thoroughly hooked at the whole idea behind it!

This is Joshua’s first foray into the world of comics and I have to say he’s learned a thing or two from his day job because the way the build for this issue goes is very solid, fairly ambiguous and completely fascinating. Starting off at a NATO meeting and having it interrupted by some unseen enemy. Gotta say I liked this because while I’m not entirely sure what’s actually happening but it does maintain the idea that Spook is a covert operative out to do something to halt whatever it is they are gathered to discuss.

I found it exciting not knowing what was happening but seeing people drop left and right by some unseen force. Outside the protestors on the street could feel the earth shake and know something is happening inside and the security force rushing in to find out what all combine to really heighten the drama of the situation.

Also new to me is Lisandro and his work on the interiors here was just as delightful as the writing. He manages to keep the suspense of what’s happening vague while showing some nice attention to detail as NATO members and security guards drop.

So with the catalyst having happened we see the rest of the issue unfold as an agency is tasked to discovering what happened and finding one man who may know the truth. Yes it’s very much in the vein of an international crime thriller/mystery but then Joshua decides you are too comfortable thinking you know what’s going on so I’m going to shake up the status quo and toss you for that loop you didn’t see coming.

Calley seems to be the lone wolf type agent but he’s being partnered with a young woman, Dr. Alyssa Wybourne at the S&T, who seems to know her stuff. Also it’s no coincidence she’s on board what with her specialty and all, you’ll find out more about that later. Still green though she does head up the debriefing of the events with the German Chancellor. See I love what Joshua does here because her debrief and the reality don’t synch up, which as you read the story you’ll understand and marvel at how that happens.

Again with the way Joshua is writing this and the totally detailed, quirky illustrations by Lisandro this is quite a gem of a find. There’s a reason I love the smaller press companies and it’s books like this one that stand out and make me believe that comics are fun, interesting and just plain entertaining. Plus if you can throw me for a few loops while reading all the better as this kind of unpredictability makes people sit up and take notice.

Red 5 Comics has a found a great team and a great story to debut a new brand of the international mystery/thriller!

Editor’s Note: Interested in checking out this sweet title for yourself? Head over to the Facebook page to find out how you can!

Summary: The CIA has been trying for years to capture and use ghosts for espionage agents, but when a mysterious mercenary gets there first and attacks an assembly of NATO top brass, the race is on to find out how it was done and if it can be replicated before the mercenary and his spectral assassins strike again. Writer Joshua Starnes and artist Lisandro Estherren mix the thrills and street-level spycraft of The Bourne Identity with the ghostly terror of Poltergeist as top agent James Calley, racing across the US and Europe searching for answers, discovers the hunter is becoming the hunted. 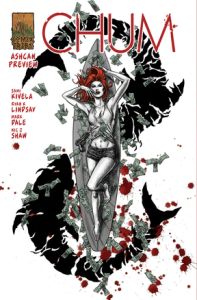 Summary: CHUM is a surf noir mini-series where an unloved triangle on a small island leads to blood in the water.

CHUM tells the story of Summer Stanwyck, a woman who feels trapped. She tends bar on the island she grew up on, the local cop is about to become her ex-husband, and she’s wasting time screwing the local reefer kingpin.

But when a bag full of cash and drugs falls into her lap, she sees a way out… and anyone who gets in her way is shark bait.

I don’t know why more companies don’t do this anymore. It’s a perfect way to spotlight an upcoming series, mini or otherwise. Get a glimpse at the characters, the interior artwork and the tone of the story so you can decide if it’s something you want to add to your pull list. A few things you should, this is a surf noir style story something you don’t come across everyday and this is a FREE preview if you head over to https://comixtribe.clickfunnels.com/optin8327800.
Included in this PDF blast is:
If you

aren’t familiar with the writer Ryan K Lindsay or the artist Sami Kivela than you’ve been missing out on the smaller indie press circuit. Both are accomplished in their fields and here they manage to really manage to wet the appetite for this series and what’s to come.
Ryan introduces us to all the key players here and reveals just enough about them so we as readers get a good understanding of their place and role on Kingsford Island. Still with little hints and clues there’s plenty left unsaid and hung in the air so that we have that desire to come back and learn more of what they are really up to.
Sami and Mark’s interiors are spectacular! Such attention to detail in every facet and the page and panel layouts are excellently done. They take the opposite approach of the Noir style here and bring this highly detail stylized story to life for a new generation and redefining of what Noir can be.
My thoughts well download it, then contact your local comic shoppe or distribution service and make sure it’s on your list. This is going to be like watercooler talk for comics fans worldwide. 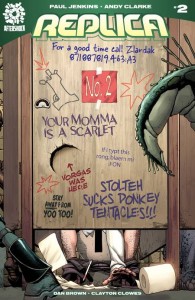 Replica #2
Aftershock Comics 2016
Written by: Paul Jenkins
Illustrated by: Andy Clarke
Coloured by: Dan Brown
Lettered by: Clayton Cowles
Reviewer: Steven Leitman
Summary: Number Two! In which Detective Trevor Churchill of the Terran Corporation discovers the only person more annoying than his alien partner is a clone of himself. In which we visit with Number Two, Trevor’s overworked and under-appreciated right-hand man. And in which Number Two gets lucky while drowning in a sea of bad luck. Meanwhile, a murder investigation hits a snag when the detectives in charge turn out to be as brain dead as the victim!

I have to say I’m incredibly impressed and since both guys here have a good long storied history in the industry that’s saying something. I wasn’t quite sure what was going to happen after the end of last issue but now that I’ve had a chance to really see what Paul intended with Trevor and his clones I’m beginning to see the possibilities and stories are truly endless and have epic potential.

Then there’s Andy whose work here is some of the best I’ve seen from him. The man has such an eye for detail and his page/panel layouts really do a lot for getting the reader involved in the story. Plus it isn’t easy to do all these clones and have them look the same in the face and yet completely different personalities to them yet manages that with apparent ease. Also there’s something about Trevor that’s decidedly rugged and handsome that translates throughout all the clones that makes you want to see and learn more about him and all that just from his visuals. Let’s not forget about his alien species either they are creative, fun and as unique as our main character is and the little bears in this issue have that Clark Gable kind of feel to them that well just keeps me in awe of what is doing here.

Paul’s characterization of all the characters continues to be as complex as can be and yet is simple to see. So that each clone has their own quirks and idiosyncrasies to them is delightful as the murder mystery they are currently investigating. That this crime will need to be solved while Trevor tries to keep his selves in check and eventually discovering that each has motives that varies from his own will be interesting to see play out. 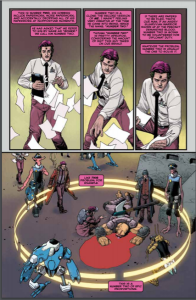 So the introduction of Ambassador Gar’El was a nice touch. I’m thinking he’s this protagonist that will stretch Trevor’s skills to their limits as he goes about his business, whatever that may truly be. Also it doesn’t take much stretch of the imagination to think that one of the clones is working with him in the attempts to be the sole survivor and eliminate the rest so he may be considered a “real” individual person. Though not sure how the laws of cloning are with so many of them around right now but I’m sure Paul will enlighten us as the story progresses.

There’s a lot to really like and enjoy about this series so far. The ingenuity, uniqueness and sheer scope of everything and everybody introduced thus far really stretch the mind and imagination so that you have to think about what’s going on instead of just coasting through it. The layering of the story, the intertwining plot lines and the massive cast involved all conspire to put forth one hell of a book the likes of which you’ve never experienced before.

Can Trevor find the being that killed the K’Tarian Emissary or will he be eliminated before that happens is something we’ll have to come back repeatedly to discover. Still with so many hidden gems in the writing and the artwork alone there’s more than enough reason to keep coming back. I mean forget Star Trek, Star Wars or Babylon 5 this is the wave of the future right here and it’s definitely already more worthy than many SyFy shows on air.