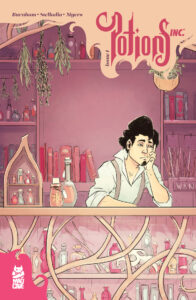 Potions Inc. #1 is an upcoming June release from Mad Cave Studios that dives into the world of Fantasy and Magic known as Primaterra with a dash of the Modern World. But I have to say right off the bat that the characters in this story’s first issue don’t exactly wow me. Its main character features Ran, (short for Randelgast Jones) one of three siblings who seems to have a problem with focusing and as luck would have it, its how he’s able to do his own magic unlike most others such as his siblings for example. The fact he clearly wants more out of life yet seems hesitant about it despite the clear opportunities he’s had is a little weird to me despite his claim of still being called to home over riding his desire for more in life. It could just be fear on his part or perhaps there’s really more to it. And I have to say as I read through this, I felt reminded of myself in certain instances in regards to how Ran is treated by his siblings and even his parents to a smaller extent and its kind of an uncomfortable reminder for me. This treatment is something I do hope that becomes less of a thing as this story goes on and given the seriousness of the situation thanks to Poncelina (or Ponci for short), it may seem like a likely thing to happen.

Ponci herself seems like someone in need of an ass kicking given her attitude towards Ran’s siblings and I look forward to seeing that potential ass kicking happen. Now given her very likely connection to Kanavin Goras, its easy to see why she has the attitude she does and perhaps may end up having to re-evaluate things by the time this story’s over with. I am curious as to how Geneva’s father is aware of Primaterra and if he himself is from that world and just how she’s going to react once she finds out those stories he told her do have a strong basis of truth. Stelladia’s art, mixed with Ian Tag’s colors is pretty great to look at and while this book didn’t exactly sell me where the characters are concerned, I am looking forward to seeing this art style again when the time comes. Just how Ran and his siblings will fare in the Modern World remains to be seen but I do have a feeling its not gonna be all that easy in the beginning!

Editor’s Note: Potions Inc. #1 will be out on June 8th! So getcha pre-order on now!

Summary: The call of adventure always seems to hang up whenever Randelgast Jones tries to answer it, leaving him facing the dull future of working in his family’s successful potion shop. But when a powerful artifact is stolen from his parents and puts them under a terrible curse, Ran finally gets the quest he’s been after his whole life. He and his siblings set off to find the missing artifact – and its trail leads them from their homeland of Primaterra to the very strange realm of…Earth.