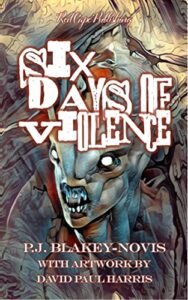 For those of you who may remember when I covered P.J. Blakey-Novis/David Paul’s Demons Never Die back in July 2021 are in for a treat as these two are back for another round in the form of Six Days of Violence. Same style as the last time as well, a short story by P.J. accompanied by a piece of art from David that reflects the story in some way. Though I honestly have to say that as I read through SDOV, things just felt so much more darker than what DND did to the point I even actually asked David if he’s okay considering how dark I felt things were. I even felt a mild sense of discomfort too from the whole thing and if you’re a fan of Horror then that may be perfect for you. There’s even a few nods to well known tales that we all grew up with like the Little Mermaid and Little Red Riding Hood as well in SDOV and I personally actually did like where P.J. decided to go with Red Riding Hood. Mostly thanks to the fact I’m a fan of Werewolves and with how that particular story ends in this title of Horrifying tales, I’m honestly curious as to what Red Riding decides to do after her encounter with the Big Bad Wolf.

The opening story and its art, known together as Static, does make you wonder if whether or not the character is just having a really bad dream due to what he did as the guilt eats away at him on the inside. This story and quite a few others along with David’s art, like in DND, can be open for interpretation in quite a few ways if you’re willing to put the time in to doing so. Though I do have to say that you shouldn’t be so totally willing to make your wife happy to the point of allowing her to poison you and that’s just one of several reasons for why I felt this latest offering from P.J. and David was just so dark. And I am pretty curious as to how a young boy ended up becoming for all intents and purposes, a Vampire. Something I imagine is pretty damned heart breaking but then again, the imagery and the story itself are open to interpretation. Static even reminded me somewhat of the song ‘My Twin‘ from Katatonia as well.

Six Days Of Violence is ultimately a look at the darkness in ourselves and the choices we make when we’re at our lowest and darkest. And a look at why you just shouldn’t mess with certain kinds of objects as you never know what doing so could do. I’m a little scared to see what else P.J. and David are liable to conjure up in their words and art in the future, as especially for David, its a long way away from his time doing JOSEPH! But who knows, maybe these two will decide to go in a happier direction. But don’t let my words stop you from checking out and even potentially enjoying Six Days Of Violence in Kindle and Print form!

Summary: Six Days of Violence includes fifty pieces of flash fiction by P.J. Blakey-Novis, ranging from the bizarre to the frightening, and each beautifully illustrated by David Paul Harris. This unique collection covers a whole range of horror sub-genres, features cleverly interconnected stories, and each short piece packs a punch.