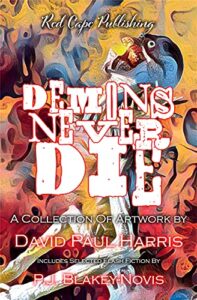 Art is often subjective depending on what various people see when they look at it and Demons Never Die is no stranger to that. And David, who has been spending a lot of his time in the last year or so creating various grey toned art pieces, approached me to see if I’d be interested in checking out Demons Never Die. Which nicely enough, collects everything he’s been doing all in one place and even features flash fiction for each piece by P.J. Blakey-Novis. And naturally, I had to say yes as I thought it was interesting and a little different in terms of doing a review on. DND features three categories for David’s works such as Creatures, Historical Figures, and Vices/Influences. Its also thanks to this art book that I learned of Amelia Dyer, a horrifying woman who killed children for years before finally ending up in prison. And while David’s art can definitely stir some emotion in you, P.J.’s short stories takes it a step further and drives home that stirring of emotion to a larger degree. Making you feel sad, regret, or disappointment as examples.

Such as Frankenstein’s Monster, whom you just feel for even more thanks to the combo between David and P.J. and you just wish things were better for the poor creature by the end of that short story. Personally, I think a lot of the art pieces/stories for them could be turned into one-shots/Ashcans but that could lose something in the process if that was done. So the way things are currently is just as perfect all things considered. DND is ultimately art first and story second and with that said, I do think this is perfect for those who love collecting art books while at the same time being perfect for regular, everyday, comic book collectors. I also (as mentioned earlier on) found this to be something of a challenge to review considering its not a regular full on comic book so that was rather nice. It should also be said that the Vices/Influences section serve as an unfortunate reminder that a lot of people have a variety of Demons within them that they have to deal with. 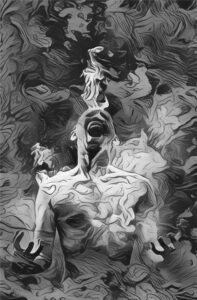 Struggles that may not be readily obvious to others and those struggling may not even be sure of how to reach out for help for whatever reason. And it should be said that its perfectly okay to reach out for help if you’re needing it. I’m very curious to see what David has in store next for folks and if P.J. will be involved in it. Whose work is also something I’d like to see more of in the future.

Summary: Demons Never Die is a unique collection of artwork and prose focusing on a range of subjects, split into three categories; Creatures features a selection of nightmarish beings coupled with creepy short fiction, Historical Figures brings the spotlight on to those human monsters from the past and the real-life atrocities they were responsible for, and Vices & Influences portrays inner demons and the dark side of the human condition. With stunning artwork from David Paul Harris and flash fiction from P.J. Blakey-Novis, Demons Never Die is a raw, disturbing, and often emotional collection.

And now, we dive into the mind of David with a few questions that’s all about DND!

1. Hello there, and welcome to the Mind Meld here at IndieComiX! For those who may not be aware of you and what it is you do, could you tell us about yourself? 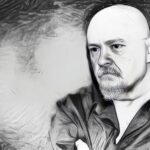 My name is David Paul Harris. I’m the illustrator for the new book Demons Never Die. Previously I wrote and was published under the name David Paul. I have troubles with arthritis now so I’ve had to put writing aside. Many years ago I was an artist and wanted to get back into it. But with arthritis I couldn’t create anything hand-drawn so I turned to the digital alternative. I spent a lot of hours trying to develop a style that at least imitated hand-drawn pieces. The result was a signature style I call abstract graphite.

2. For about a year and some change now, you’ve been steadily putting out various gray toned pieces of art featuring a variety of imagery that DND described as three separate categories such as Creatures, Historical Figures, and Vices. What brought this on?

I’m not sure how to respond to this question, but I think I’m about to meander. There is something inside me that observes the world and needs to illustrate (or write about) what I see. Some look at my work and make the accusation that it’s “of the Devil” and assume I must be in league with Satan. I’m of the opinion that any work must stand on its own and speak for itself, so I am always interested in what people see in my work. Yes. Much of my work is an attempt to convey the evil I see in the world. There are fathers who assault their families and sexually abuse their children. There are childcare providers who are trusted with the lives of precious and helpless children who take their lives. There are world leaders who lead masses to destruction in the name of their own egos. There is a plague of darkness afflicting our world. These are the things I illustrate. Not because I serve the Devil, but because they are. 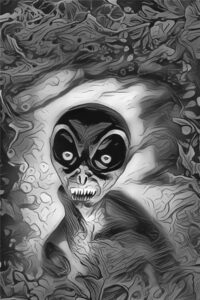 3. A lot of that work eventually turned into what we now know as DND, what led to that happening?

When I conceived the idea for the book I knew I wanted it to be in three parts. There are figurative demons and literal demons. You can look at an alcoholic and know that person is battling a demon. But there are also people walking this Earth who are demons in the flesh. I wanted the book to convey all three ideas.

4. How’s the feedback been so far for the project? Both before and after its become DND?

Well, it’s still very early but I’ve been told when reviews start being published they’ll be positive. As for people I’ve talked to personally, they all say they want the book in paperback. Some have said they like to own a hardback edition. 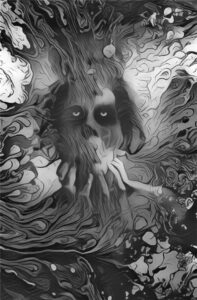 5. What’s next for you now that DND is finished?

Promotions! But I’ve finished numerous works for book covers that have yet to be published that I’m eager for people to see. As for my next book, I have a few ideas. One is my take on Reincarnation and Sci-Fi, another is a horror-thriller, and a third idea is a sequel to Demons Never Die titled Demons In the Flesh. But, like with comics and movies, it depends on how this book does. I am also working on a project called Shadows of Death, but it’s way too early to talk about.

6. Well, I’m pretty sure a lot of us are hoping for a great turn out in the end! Considering your mention of having Arthritis, something I’m sorry to hear about and forgive my ignorance on this, wouldn’t that eventually come to affect your ability to do art via digital means?

That’s a fair question. Currently the arthritis is affecting my left hand the most. I’m unable to make a fist and I have a hard time holding certain items. The right hand isn’t as bad but there may be a time when I’ll be unable to control the mouse with precise accuracy. If that happens I’ll just have to roll with it and find another way to create.

7. What would it take for DND to land a Hardcover Edition?

That’s a decision for the publisher but I would think enough sells of the paperback edition to make it viable. So here’s hoping.

8. Is it disheartening for you when some automatically proclaim your work as part of ‘Satan’s Ways‘?

It really is. I’m a Christian. People who make such baseless accusations do so from their own prejudices. However, I also understand their knee-jerk reactions. My work is foreboding. It’s not exactly sunshine and unicorns.

9. Since the beginning of the Pandemic, how has it affected you personally? And how do you feel it could have been handled differently?

I’ve continued to work throughout the pandemic. My 9-5 is security at an assisted living community. The very first week we knew we were positive with COVID we lost nineteen residents. It hurt. A lot. In such an environment you get to know the people who were one day smiling and laughing, and within a week you’re escorting their bodies to be carried away by funeral homes. All the while you have to tell their families they can’t see them and listen to them cry, knowing they will never see their mother or father alive again. And then you go home and have to listen to the news channels report on the people who don’t believe it’s real. As for handling it differently? I think the US and a number of other countries did the best they could, and are still in crisis.

We need to do what medical professionals instruct us to do and not YouTubers with conspiracy theories preaching in a livestream from the front seat of their truck on the side of the road. Things are getting better, yes. But the virus has mutated, which we knew would happen because that’s what viruses do. We’re not out of the woods yet. I’m happy some things are returning to normal thanks to the vaccine, but we need to be on our guard. 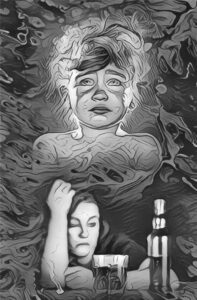 Growing up I was Marvel but I always loved Batman. Now I don’t recognize Mainstream Comics. I worked for almost twenty years in the Indies so, yeah. I’m an Indie Guy all the way.

11. You mentioned a take you have on Reincarnation and Sci-Fi, any details of that you can give?

Imagine you had a past life on another planet. One day you suddenly remembered that life and realized you were never able to complete an important goal that very much affects the people of Earth. More so, the people who judged and condemned you in that past life have made it impossible for you to complete that goal. You have to return to that planet. But how? 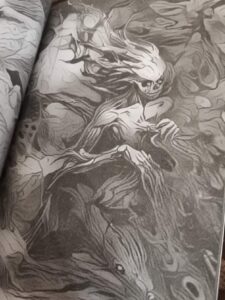 12. As for my final question, what advice would you give to those looking to get into the Industry?

Don’t do anything for money. Do it because you are filled with passion for it, or don’t do it at all.

Editor’s Note: Very well said! Huge thanks to David for agreeing to take part in this interview and here’s to the best of luck on a lot of success with Demons Never Die! Which is available on Amazon!