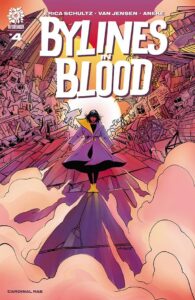 With the arrival of the 4th and final issue of Bylines In Blood back in April and me of course taking my sweet ol’ time in getting to reading it, comes the fact that issue 4 is also the final issue in the storyline. And I have to say I greatly enjoyed this 4 issue Mini-Series by Erica Schultz, Van Jensen, Aneke, and Cardinal Rae. The truth to find who killed Denzin and why took us on quite the journey in this take of a Post-Pandemic world where things aren’t the greatest and it needed no Super Heroics either. Just someone, namely Satya, aka the Lady Dick, willing to do what it takes to find out the truth in a world where the truth isn’t all that important as money is. Even if part of what it takes involves being injured and getting unfortunately framed for a murder. Allowing us and for Satya to learn who she really can trust in this whole mess and as well as learning the fact that walking around wearing a Sheep mask seemingly doesn’t seem to draw any attention. Making me think a little of the Wyatt Family there from the WWE but of course, less Cult like.

Jenn the Clorox is someone who will do what he feels he needs to do, even if that involves twisting the truth to suit his and his followers’ needs. Even at the expense of others but ultimately, he gets what’s coming to him and a heap of justice gets served and a happy ending gets to be had. Now, in this case, a happy ending is subjective considering what it took to get to this point to uncover the truth and how some folks like Denzin’s daughter will go on from this point moving forward. Again, I really enjoyed this 4 issue Mini and if Erica and the team were to re-visit this world for more case work with Satya to deal with, I would be all for it. But here’s to hoping though that the next Mayor of Satya’s home town will be a lot better than the last! And when the time comes, I’ll definitely be getting a copy of the trade!

Summary: Our fearless private detective Satya is now public enemy No. 1, framed for a murder she didn’t commit. She’ll need to outrun the police before she can force a final confrontation with Denzin’s murderer. And just as Satya makes a break in the case, the mysterious assassin goes after someone new: the person Satya loves most.