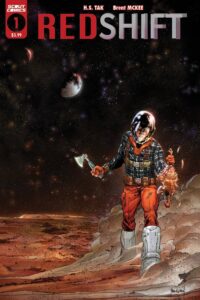 Now I know what you’re thinking, ‘Rob, why are you covering the first issue of this book when it was released last year!?’ And well… Have ya met me? I take forever at times to get around to things! Which is continuously a work in progress for yours truly and I am forever apologetic about that. But enough about that and more about H.S. Tak/Brent McKee’s wonderful Sci-Fi tale known as Redshift! A story about Humanity in its Struggle as Resources have dwindled and not even Mars can save them at this point. Which will no doubt cause some strife while others try to find some way to keep the Human Race from dying out. Even if that means sending someone or a group of someones on a voyage for a new hope despite the apparent dangers said voyage has. Hellener ‘Hellz’ Drake is the newest individual to be chosen for this mission despite the fact he quit the Exploration Academy at a point before this story started. Which is either really bad luck or really good luck depending on how things end up going for Hellener and at some point I will be getting my hands on the next 4 issues to find out how things are going!

Either that or I wait until the trade’s out and can just find out all at once. I like that Hellener is something of a mouthy but intelligent guy, even if he does unfortunately have some trauma in his past where not only his mother is concerned, but a team mate/friend as well. Now I am curious as to why its felt Hellener is the best suited for the mission to find a new home over everyone else and hopefully it gets touched on in the issues after this one beyond the fact he’s willing to make a hard choice despite how much it’s bound to eat away at him. Now its possible there’s not much more to it than that and I could always be wrong but I will ultimately say this has me hooked and looking forward to reading more when I have the opportunity to do so!

Editor’s Note: Head here to get started on reading Redshift!

Summary: While humanity grapples to survive on Mars, the Ministry of Exploration pins mankind’s last hope of resurgence on an astronaut who’s scared of space. In this space odyssey brew of Total Recall and Interstellar, Hellener and his team of explorers hunt for a new home while civil war threatens to obliterate the last bastion of human life.