SPECTRAL: A SHOWCASE OF FEAR
Now Live on Kickstarter 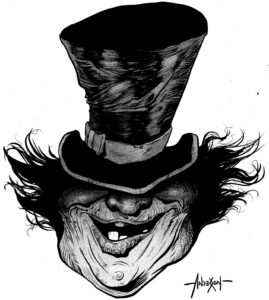 JUNE 7, 2022 (SEATTLE, WA) — This is your showcase of fear. Six short horror stories brought to life with lush, atmospheric black and white art—and a single color in each tale to bring such nightmares into a sinister focus. Announcing the Spectral: A Showcase of Fear Kickstarter, an all new one-shot horror comics collection from the Lost Angels: Paradise High team; written, lettered and designed by David Accampo (The Margins, Sparrow & Crowe: The Demoniac of Los Angeles) with art and colors by Chris Anderson (Heavy Metal, AMC’s Creepshow).

A boy dresses himself in a devil costume, but the warm, leathery hide is more a trick than a Halloween treat. A young couple camps in the woods, but is their devotion to one another enough to break a witch’s curse? A medieval knight faces an uncanny foe under a full moon. A young woman moves into her dream apartment… and then the nightmares begin.

Brought together through a unique framing sequence, Spectral: A Showcase of Fear introduces the strange figure of Professor Spectral and his Magical Mystery Puppet Theater, establishing himself as a new host as an homage to terrifying horror classics. 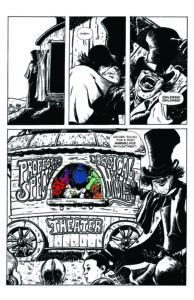 “This book is a chance for me to continue making comics with Chris Anderson,” David Accampo (he/him). “We’re both horror fans, we both love comics, and from the moment we created ‘DevilSkin,’ the first short in this anthology, we knew that this was something special. This Kickstarter campaign is about taking matters into our own hands, lovingly crafting something that’s the pure vision of two long-time friends and collaborators. All of the stories in this book reflect our process, which is a spooky blend of both of our storytelling sensibilities – bigger than either of us, and better for it.” 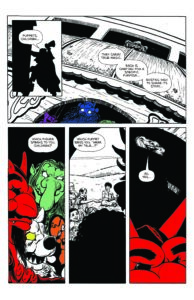 “We started this project while we were still working on Lost Angels to give me a break from drawing wings,” said Chris Anderson (he/him). “We gravitate toward the weird and creepy, so it was a no brainer. The spot color kind of just happened with Devilskin so we decided to work our way through the spectrum. It was organic. When Son of Jen made some puppets, It informed who our host had to be with Professor Spectral. It was all very serendipitous. In fact, my own style changes a LOT over the course of the stories and it serves the book even better. It was all meant to be. Even YOU were meant to read it.” 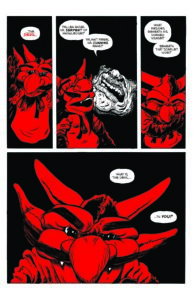 In the spirit of the classic EC Comics The Vault of Horror and Tales from the Crypt, Spectral: A Showcase of Fear focuses on lush, atmospheric art and spooky cautionary tales. Puppets realized by Andrew Jenson, who is also creating a limited supply of and-crafted, limited-edition puppets as Kickstarter rewards! Collection edited by Marissa Valentini.

Editor’s Note: Spectral: A Showcase Of Fear is currently at 2,486 dollars of its 12,000 dollar goal! Donate today and help make this Collection of Horror tales a reality!