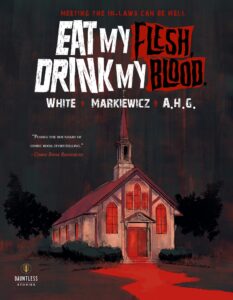 I’m gonna come right out and say it, Eat My Flesh, Drink My Blood ranks up there in the few comics I’ve read that I considered to be well… Fucked up. And this book and its creative team are massively unapologetic about that and that, my friends? Is perfectly fine to me. If you’re gonna go into a book like this with ding dongs a swingin’ about, you shouldn’t be apologetic. Jonathan and Lisa, our two interracial love birds, are the main stars of this book and their dynamic is great. Though I have to say her smile at times was just a little too wide and happy at times and I wonder if that was done on purpose as a mis-direction sort of thing since one might start to think later on that either her or Jonathan is playing the other for a fool. Sorta like in Spellbinder once upon a time. And by the time all’s said and done in this book, I think we can all agree that Jonathan was right to be apprehensive about visiting his parents again for the first time in years and should’ve just not gone through with it.

Even with the notion of his father dying and that possibly making him look bad in Lisa’s eyes for a while. I love the stark contrast between the home life Jon and Lisa have and the hometown look of where Jon comes from. Adam Markiewicz and A.H.G. do a great job in showing off the differences in the two, one being a happier, more colorful life while the other isn’t. Which should give off warning bells quite frankly and with events we later start to see once Jon and Lisa come to Church, it really gives a whole new meaning to drinking the Blood of Christ and eating his Flesh! A very fucked up and disturbing meaning at that! To my knowledge, this is the first time I have read anything done by Frankee White, though its not the first time we’ve covered a book of his. As in 2019, Derrick Crow covered Frankee’s Broken Bear title for Caliber Comics and nicely enough, featured Adam and A.H.G. as part of the creative team!

So this was a nice experience for me to read Frankee’s work and that he doesn’t go for a cliché ending at the end is even better. Though it does make me wonder how Lisa will handle things going forward after all’s been said and done. Will History repeat through her or will she be able to over come it all? Only time will tell, that is if Frankee and the team choose to do more!

John and Lisa are engaged and looking towards their future when John receives a letter from his past. John’s estranged father is dying, and his mother wants him to meet with them both for mass at their parish. Lisa, curious about this mostly blank spot in her fiancé’s life, presses him to heal his family wounds. John agrees on one condition: Lisa must join him. What comes next is a dive into a uniquely absurd romantic horror by the creative team behind the critically acclaimed graphic novel, BROKEN BEAR, that asks:

“HOW FAR WILL YOU GO TO BE WITH THE ONE YOU LOVE?”