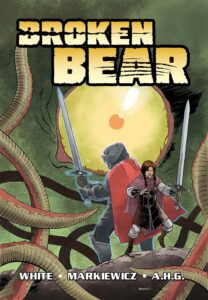 Broken Bear is a comic that from the outset looks as if it’s going to be an incredible read. The art and colors are gorgeous, the cover is quite attractive in its design, there’s a lot of intriguing things going on with the cover that sort of just makes you go “I want to read this.:

Thankfully, I’m here to tell you that the book lives up to the hype. While the cover as a whole has some misreadings to it on what exactly will be important to the story, the art is exactly what you’re getting and the actual story is pretty killer. Literally in most parts of the narrative.

The story of Broken Bear is an amalgamation of high fantasy adventuring and a sort of narrative style that’s been prevalent for the last decade or so when it comes to telling these sorts of stories in that to break the mold on what most people perceive as fantasy, characters talk and act like us in the modern day. Especially the magical creatures. Humanizing them and allowing them to be more relatable. And thus more approachable within the narrative.

Where I do think White truly does break the mold in his adventure is with Selm, the main character. Without getting too much into spoilers she is a very selfish person and even when she attempts to do the right thing stuff always manages to go south very quickly. And this is a character trait that defines her and persists throughout the book. Like many people in real life Selm doesn’t really grow from her experiences, after all she hasn’t been on the road on her own for very long.

This is all new to her so what lessons can she actually learn just yet? 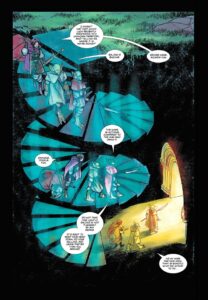 While at times this makes it difficult to root for Selm, especially later in the book, it does make her exactly what she is: Human. And there are an unlimited number of variations to the human personality. Done to death we’ve seen the stoic, heroic, good to the bone fantasy heroes. Both men and women. Here we get the story of one of someone almost out of Game of Thrones and follow them. It’s pretty cool.

The cast of characters in this story are fun, and I sort of wish more of them had made it onto the cover. On her adventures Selm very quickly encounters magical beings that exist on a separate plain from most human reality. And they’re quite fun to follow. From BOTH Kiklyn’s, bonded in life and death, Daren the armorer, and even the overlord that is Balzac and his incredibly unique stone armored henchmen that I simply love as a concept from their awesome look to their sad and grotesque origin.

Seriously, the armored henchmen are one of those monster ideas that you see it and go “I really wish I’d thought of that!”

Like I said up top the art and colors are phenomenal and that persists throughout the whole book. This looks really professional from the first page to the last. The imagery that is splayed across each page is almost filled with gorgeous imagery just spewing from Markiewicz & White’s noggins. Everyone who worked on this put in the utmost love for this book and it shows.

You can pretty much always tell what’s going on in any given scene. There are only one or may two instances where it could’ve been a bit clearer but that’s not a big deal. The action is really fluid, and staged really well. The mystical moments are a bit cliché in how they look but that’s really a detraction as it is just a slight criticism.

Broken Bear is not a broken story. It holds together quite solid and remains fun all the way through. It isn’t overwritten, it’s very cleanly drawn, and ultimately it’s something that I hope we get more of in the future. If anything because of that bat-crazy ending that I cannot spoil.

You’ll just have to go read it. 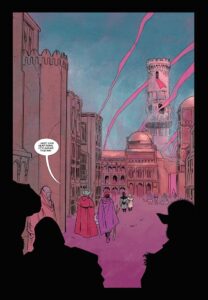 For physical copies, you can pre-order through your Local Comic Shop using the Diamond code:
JUL191782. The book hits shelves everywhere September 25, 2019.

Summary: In a forlorn time, Selm is a young squire to the Bear, a well-known and almost legendary knight. However, after a deadly encounter with a witch Selm ends up inheriting Bear’s strength and stamina as well as his armor. And off on her adventure she goes. Here she comes across fascinating creatures of all-sorts which lead her down a rather destructive path. Only her own wits and will to live may hold the key to set her free.