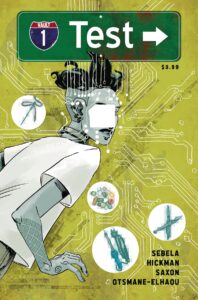 Every now and then you come across a comic that makes you want to scratch your head as you try and understand everything. Which, depending on the comic and how well its being done with that kind of concept, can be a good or a bad thing. Luckily, Christopher Sebela and Vault Comics’ newest offering in the form of Test is much of the good. Aleph Null is someone whose allowed themselves to be a Guinea Pig for all sorts of testing. At least until one day when they seem to wake up and say ‘No more!’ and haul ass for elsewhere. Though Aleph easily brings home the importance of NOT freaking out your ride! Sure, you can never be really certain about most people that will let you ride with them but its good sense to not freak them out.

As you never know what could happen! But considering Aleph clearly has issues from the get go thanks to who knows what they’ve been exposed by for testing purposes, we’ll let that slide with them. Though its doubtful they’ll even realize that babbling what seems to be nonsense is a bad thing to do unless someone actually say something. Reading through this a second time also helped me realize that what I thought was other people dressed the same as Aleph was actually just Aleph as well. Which is more bad on my part for not paying better attention. Now, we have Aleph on the run from a former life as a test subject, seeking a mythical town called Laurelwood.

A place where the residents get to see all sorts of fun stuff and test it out for years before the general public gets their hands on it. Kinda sorta like in the show Eureka but probably with less chaos and the like happening! Aleph’s journey to get there isn’t exactly easy but in a way, it makes you wonder what exactly is real and what exactly isn’t given this is from Aleph’s perspective that we’re seeing things. Especially, as mentioned before, Aleph’s been subject to numerous things for who knows how long and its all clearly had a strong effect on him. And because of that, its going to be one Hell of an interesting read as we see more and more of this story unfold. Is the person Aleph’s talking to on their phone really there? If so, are they connected to whoever they are running from? Is the final scene really as bad as it looks?

Who knows but I certainly can’t wait to find out!

Summary: Aleph Null is a lot of things: An orphan, a human guinea pig undergoing medical tests for cash, a bodyhacker, a hardcore future junkie, and a corporate asset. But now, Aleph is on the run from their old life, in search of a mythical, Midwestern town named Laurelwood-where they’re test-marketing the future with tech that can’t possibly exist yet, and won’t for decades.