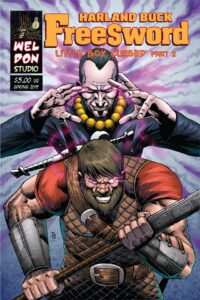 And here we are with the second part of the storyline of ‘Little Boy Cursed‘ and respectively, the 7th issue of the series. A milestone to be certain, especially as to my knowledge, Scott Weldon hasn’t once made use of something like Kickstarter to fund each new issue. Most likely using funds from his own pocket from sales of Harland Buck or from a job to get each comic out there. Now this isn’t me talking down on either method so don’t worry about that as I just wanted to point it out. And I’m curious to see if Scott continues to go forward without making use of Kickstarter. Though if and when he makes a complete collected edition of the entire run that’s out so far, he’ll probably make use of it then.

Now in my last review, I talked about (and I’m talking about it again a little) how Scott’s spent his time providing us with World Building 101 with each new issue. Allowing us to see this and that here and there and making everything feel alive and getting to know Harland himself from time to time. ‘Little Boy Cursed‘ finally allowed us to see Scott’s take on Magic and some of that inspiration of Scott’s thanks to a certain X-Men run. True to character around the beginning, Harland’s skeptical and mistrusting and that occasionally can be a bad thing. Especially when lives are on the line but with him, it makes sense for him to act like that. Even when he does know what the stakes are but it wouldn’t be him if he was essentially having no issues with anything.

Now what he has Alon do later with his abilities is downright masterful in my view and it makes me happy to see him making use of something he’s not exactly sure about. Whether or not there will be consequences Harland will have to face later on where the Aegis Armagon is concerned is uncertain but its something I look forward to seeing if there are and how Harland gets out of it when the time comes. I was also honestly expecting some very serious stuff to go down given what we’re shown in the cover and it actually being a thing in the issue but I love that despite his somewhat limited view point of a lot of things, ol’ Harland isn’t about to let himself be anyone’s bitch for long.

And who knows, maybe one day we’ll see the return of Alon and he’ll be a kickass magic usin’ FreeSword himself! I’m sure Harland would probably have a word or two to say about that but hopefully they won’t all be bad words! I gotta say though, its downright cruel of Scott and friends to leave us with a cliffhanger at the end and no intention to follow up until 2020! It makes me wanna hide in a corner and weep! Weep I say! Though I like the fact he wants to expand on the Harland Buck world, even if that does mean having to take away some focus from the primary title but I look forward to seeing what he has in mind when the time comes. And I think its a good thing he chose to wait until the 7th issue to even think of expanding as doing so before now probably wouldn’t have worked out that well.

So if you’re still sleeping on this, stop doing that and get familiar with Weldon Studio and ol’ Harland himself!

Summary: The conclusion to an adventure, where two runaways show Harland that some bed time stories are frighteningly real.