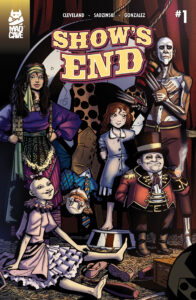 Jumpin’ Jehoshaphat, Mr. Rogers! Mad Cave is back at it again with another new title straight outta the cave. And this time… Its NOT the good man Mark London at the helm of writing duties! A shock for this ol’ fella’s self and such! Whom is at the helm of writing duties and all you wonder? Why none other then Mr. Anthony Cleveland! And with a guy like this, and a title like this, you think you’re gonna get some wildly fun scenes of Carny shenanigans and such. Unfortunately, anti-Carny people make that just a little bit harder then it should be for that kind of thing to happen. The jerks! But enough of that (for now) and let’s instead focus on other things for a moment or two! Like a lack of origin story in this first issue. Which is pretty nice and leaves some nice mystery regarding the formation of the Carnival.

We’ve also got a young lady (named Loralye) with a rather hairy problem at times who definitely deserves better in my view. Her momma shoulda taken that shotgun to her so called daddy as he would have definitely deserved it. And this, along with another thing or two, sells me on Anthony Cleveland wholesale by the end of this first issue. To my knowledge, Show’s End is my first comic with his name attached to it and its a great way to get an introduction to the man. His work here has me interested in seeing his work elsewhere and I’m gonna try and do so soon where that’s concerned. Jef Sadzinski, Julian Gonzalez, and Justin Birch are a good match for the creative team here. Especially in the tease or two we’ve gotten of Loralye’s other form.

Something that makes me wonder if that’s a Supernatural, Biblical, or some kind of unfortunate aspect of life deciding to be cruel. I love the relationship (however brief we get to see of it) between Flipsy and the Bone Man. Its a heart tugging sight and I have to wonder how the end of the issue is gonna affect the man. Especially considering Loralye’s (though unintended I’m sure) actions that causes anti-Carny types to be jerks once again. Which, now that I’ve focused on the other things, we can get back to these guys. Fear of the unknown and of change has long been a part of human history and sadly, its caused some problems. Problems we probably could avoid if we were just a bit more willing to open our minds to other possibilities. Of course we’d probably not learn certain types of lessons but at least there’d more than likely be less death.

Being different, being part of the unknown, is okay. Its not a bad thing at all unless its actually wanting to kill you and possibly end the whole planet. Though sadly, considering the time period Show’s End is set in, its gonna take some folk a good long while to truly realize that. Whether or not they live to be able to do so remains to be seen as no doubt, there’s gonna be Hell to pay where Flipsy is concerned. Its gonna be a long wait until September to see what Anthony has in store next for the second issue but something tells me its gonna be a long wait that’s worth it. This isn’t Super Heroics and if you’re looking for a non Super Heroic book, Show’s End is definitely gonna want to be something you’ll want to check out. Though, if you’re a sensitive type, you might wanna have a tissue on hand!

Editor’s Note: Show’s End #1 will be in stores on August 7th. Hey, that’s my birthday, awesome!

Summary: Equal parts brutal and beautiful, Show’s End takes place in Georgia during the 1920s and follows Loralye, a 12-year-old runaway seeking refuge with a traveling group of freak show performers. At first, she isn’t welcomed for being too “ordinary.” But what her new found family doesn’t know, is that Loralye is hiding a secret more freakish than anyone could ever imagine!