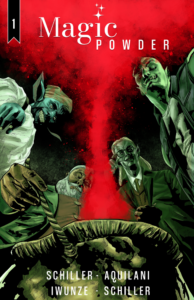 When I started to read Magic Powder I started to gradually feel reminded of the Will Smith/Netflix film ‘Bright’ that came out a few years ago. That reminder became pretty strong by the end of my read of the first issue and its mainly because like with Bright, this is a story featuring Fantasy characters set in Modern Times but without Humans. Or at least as far as I can tell there’s no Humans in this and its nice to see as its proof you don’t need us Humans in a story to make it work. Now Jeffrey Paul Louis Schiller only really shows us the seedier side of the Magic Powder ‘Verse in this first issue and honestly? Its fun to see for me and I love the name ‘Dwarvfather’, even it is something you probably wouldn’t take too seriously. Especially for a Dwarf Mafia Boss but it works, and it works fantastically. There’s also something of an info sheet for this comic called ‘The Thesz Report’ that helps inform folks of who is who in this world and I think it would’ve worked better being part of this issue at the end rather than its own separate thing.

Now Thesz itself is a city and its a city free of Elf Law, in fact, its the only place that is free of Elf Law. Why its like this hasn’t really been explained but that’s perfectly fine as a little mystery is always great. Though given the way things end up going for Dwarvfather and Zjah deciding to take advantage of that by the end of this first issue, Elvish Law taking over the place may end up being a thing by the time Jeffrey is done with this story! Now I’m not sure how long of a run this book is gonna have but either way, I am here for it as I am hooked and want to see what happens next. Especially if Zjah openly takes responsibility for his actions that ultimately sparks a war. I also just want to say that Daniele Aquilani does some great work here and I look forward to seeing more of that when the time comes. Magic Powder is available in both Print and Digital!

Summary: Magic Powder is an on-going comic book series that combines elements of many genres like fantasy and crime to create a world full of conflict and wonder. Elves, Dwarves, Orcs, Goblins, and many others battle for their piece of the MAGIC POWDER pie in the city of Thesz.