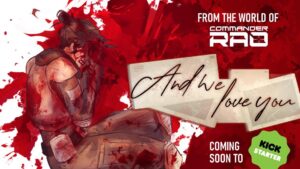 “Would you rather die alone, or with someone holding your hand?”

TORONTO, 02/10/2022 – From the world of the award-winning, Joe Shuster-nominated COMMANDER RAO from Scout Comics, comes a brand new graphic novella by Fell Hound called AND WE LOVE YOU – an emotionally-charged war story about a young soldier who bleeds out her memories.

What is AND WE LOVE YOU about?

In the wartorn future of 2X66, a young soldier lies dead on the battlefield, waiting to be buried in a mass grave with her platoon. Victim to a cruel and unending war, the only mark of her existence is a memory–slowly bleeding out onto the rotted earth: The joy. The sadness. The excitement. The loneliness. The love. The fear. A lifetime of memories. Bled out one by one. Soon to be forgotten forever.

This is the life of Julie Rao. 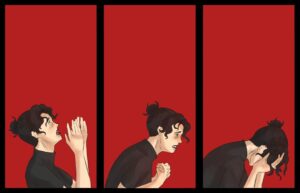 They say war is a story told by the survivors. But what of the stories that never got told? Taking the heart and soul of Stand by Me and the mournful suspense of Grave of the Fireflies, AND WE LOVE YOU is a 64-page graphic novella about war, regret, and the crushing tragedy of dying young. It is a life story told in blood spilt, and a candid reminder of how little we know about the people we love.

“AND WE LOVE YOU is a decade in the making and by far the most personal comic I have created. An unfiltered look into the eyes of death, only to have it stare back in the slow, quiet resolve of bleeding away. It’s a story that could not be told in any other medium and I’m extremely proud of what we’ve made.” says Fell. 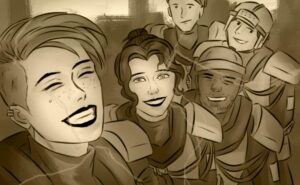 Who are the creators?

What others are saying about And We Love You:

“I continue to be in awe of (Fell’s) page layouts” – Ryan K Lindsay (Eternal, Everfrost)

“A cinematic masterpiece in the way that only comics can produce.” – Marcus Jimenez (founder of Dauntless Stories, Deadly Living) 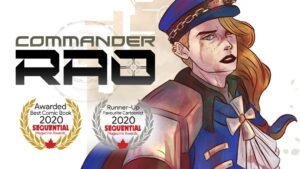 Commander Rao, Fell’s debut comic with LetterSquids, was self-published in 2020 to great fanfare – raising over $8000 on kickstarter with the help of nearly 350 backers. Garnering critical acclaim on release, critics praised the one-shot for it’s inventive, cinematic fight scenes as well as Fell’s emotive storytelling. Comic Book Yeti called Rao “…more interesting and well put together than entire catalogs of some publishers.” The comic went on to win a Sequential Magazine Award for “Best Comic” and was nominated for a Joe Shuster Gene Day award for self-published works. Commander Rao has since been picked up by Scout Comics, and was released in stores November of 2021.

The Kickstarter for And We Love You launches February 16th.

Follow to pre-launch link below to be notified of launch:

But wait! Who is Fell Hound? 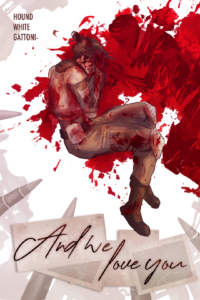 Fell Hound is a queer, asian canadian comic creator from Toronto. She is best known for her work on the award-winning Commander Rao with Scout Comics, as well as her love of drawing sword ladies on the internet. Her work has been featured in numerous anthologies such as Project Big Hype, Yule, and Boston Powers. She was also a creative advisor on the recent Color of Always anthology – a collection of queer love stories. When not giving herself rampant carpal tunnel, she enjoys watching Arcane, making cooking videos, and consuming queer fiction. 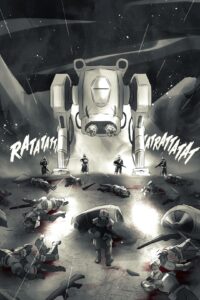 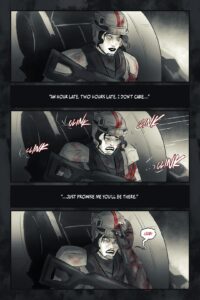