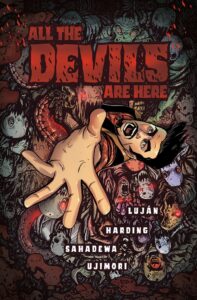 Jarred Lujan has done it again with this latest offering of his in the form of All The Devils Are Here (or ATDAH for short) and what a fast paced read it was. And if you don’t know, ATDAH was a successful Kickstarter as well for that matter. I kind of even forgot that this was a 44 page one-shot but that didn’t ruin anything for me even if I did kinda think this could’ve been a mini-series but I’ll get back to that in a bit. I found it interesting that Jarred and Matt Harding went a somewhat different route when it comes to possession as usually the one possessed doesn’t typically also have Dementia or other issues. Then again, that’s also not something I pay a lot of attention too so I could be missing out. Which with the Dementia at play here, it definitely has the potential to add more danger to an already bad situation but JC doesn’t let that stop him one bit. Now JC doesn’t really have time to breathe once he’s in Joe’s mind but together with the three voices in his own head, he presses on regardless. I have to say, Matt Harding and Warnia Sahadewa do a fantastic job bringing to life everything in this book and I would love to see more of them together in the future.

And its also clear that the influence of the Wu-Tang Clan that has a hold of Jarred so deeply has its place through out this book as well. The design by Matt for the Archdemon known as Corson in particular is one I really found fascinating the most given just how unnatural he looks and it makes me wonder how long it took for Matt to come up with the look for Corson. His look fits for a Demonic entity like that since they aren’t supposed to look Human at all and I imagine it would look even more terrifying on screen. Now I don’t know if Jarred and the team purposely chose to make ATDAH a 44 page one-shot because they didn’t feel a mini-series was possible for whatever reason and given COVID still being a thing and supply shortages, that’s entirely a good possibility. Or its just entirely possible that he and the team chose to do the story as a one-shot given the fast pace/on the edge of your seat action as they felt it was best and that one issue at a time would perhaps ruin the flow. 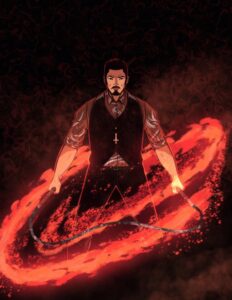 Either way, at the end of the day, the story is good and that we only get a brief glimpse at JC’s origin for how he ended up in the life he’s in now is pretty nice. And if the small sample of what he starts doing towards the end is why he’s called Eater, I have to say that’s mildly disturbing. Nor can that be easy on the stomach!

Summary: A 44 page horror-thriller comic about an elderly man with dementia possessed by a demon and the man tasked with saving him.