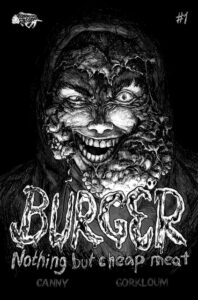 Burger is one of those kinds of books that are perfect for those who like a combined mix of Psychological Horror. And for those who like a certain kind of art style that doesn’t lend to happiness and rainbows and shows more so the ugly side of life. Or at least, how Burger himself tends to view it and has quite possibly done so since he was a kid and a slug invaded his brain. Whether or not that’s something he dreamed up after getting beat up by a bunch of jerky ass kids is entirely up in the air as Ben Canny and Gorkloum are keeping that to themselves for the time being. Fast forward to when he’s an adult and life still isn’t that much better for our Burger, especially when he’s told he has only a certain amount of time to live and the Doctor isn’t all that helpful. Though again, whether the unhelpfulness of the Doctor is an actual thing or just how Burger perceives it in his head, is unclear.

But I like that Ben Canny is keeping things from being all that clear and I look forward to seeing how things unravel as time goes on with this story of his. Especially with what we start to see Burger doing towards the end as that’s definitely some nasty business he’s being (possibly) influenced to do. I am curious as to how much more of a part his sister will play in things, especially given what he thinks of her and isn’t shy about that view point either. Burger is also about to start a Kickstarter run on the 29th so do be sure to get your pledge on when the time comes!

Summary: A psychological, psychedelic, body horror comic miniseries that follows an angry young man on a doomed quest to find his better self.