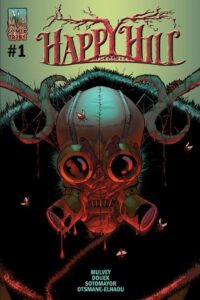 If there’s anything Life and Comics (especially ComixTribe’s Sink) has taught me over the years is that I shouldn’t take things at first sight. That I should take extra notice of things and people and that lesson certainly applies here in the first issue of Happy Hill. Even if you have known someone for years as there can still always be layers to them you aren’t even aware of and something tells me Mackenzie’s mother is gonna get a hard lesson in that by the time this story is over with. A story that is part Supernatural Thriller and Horror while also asking the question of how far are you willing to go for the pursuit of happiness? Something I hadn’t necessarily thought about until now but I’m pretty sure I wouldn’t go too far in a bad way but then again, who knows for certain. Now I’m curious about the spelling of the boogeyman for this story, is the Wudsman the original way of spelling the Woodsman or is this just something Joe Mulvey and Rich Douek came up with? I went and Googled but so far I’ve turned up nothing but I’ll keep looking either way since I am pretty curious.

Is the Wudsman cursed to do what he or she does? Or is this merely a role someone or a group is playing to create a sinister urban legend? Either way, I look forward to seeing if that gets explored along with the Happy Hill Inn itself. Which, as we readers get to see, has a lot to offer its guests but it just seems too good to be true. A feeling Wyatt Willows and Thea Rippley no doubt will be feeling as well and will want to look into things! Or, at least, Wyatt will since Thea isn’t as on board considering past experiences! Will those two get involved in the search for the missing Mackenzie? Only time will tell and a certain mask being left behind will no doubt be something Eudora Hill will be pretty unhappy about given it seems she has other concerns unrelated to a missing girl and what not. Of course, I could be wrong but either way, Miss Hill is a little on the sketchy side! 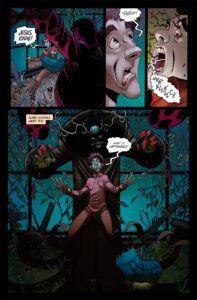 Which goes back to that whole not to trust everything at first sight thing I was on about before. Joe Mulvey, Rich Douek, Christopher Sotomayor, and Hassan Otsmane-Elhaou have a great first start here that has me hooked and I can’t wait to see what happens next! Happy Hill #1, along with its second issue also currently has a Kickstarter going right now that’s already a thousand dollars past its funding goal with 10 days to go. So if this Supernatural/Horror/Thriller/Mystery is something up your alley, be sure to get in on this while you can!

Summary: Happy Hill is a posh resort in the Catskill Mountains of New York that promises that its guests will leave truly happy – the only problem being that many of them never leave at all. Wyatt Willows is obsessed with the place, and its connection to The Wudsman – a horned, masked figure that most people think is an urban legend, but who he knows is both real and deadly.

When a child goes missing on the grounds of Happy Hill, the investigation uncovers dark secrets hidden and an unstoppable supernatural menace aiming to make this vacation permanent!