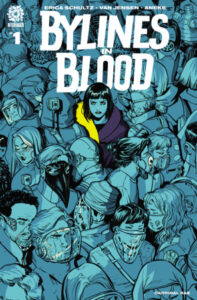 When I first heard of Bylines In Blood, it caught my attention as it just screamed at as being something different. Something that wasn’t Super Heroics and after taking my sweet time I finally sat down and read my copy of BIB and it didn’t disappoint at all. Erica Schultz and Van Jensen offer a look at a potential future where the Truth doesn’t matter and life is somewhat crap for quite a few following a Pandemic (also called ‘The Plague’) that didn’t end well for everyone in what is simply known as ‘The City’. Which… Is a scary thought given the potential we have for heading into something very similar given COVID and the Variants we keep getting. Now Erica and Van take things a little further with their take on the Pandemic where certain elements of the Population who were affected ended up being changed and becoming known as ‘The Clorox’. Something we get to see a little of, at least in the opening pages of this first issue and I’m curious if we’ll be seeing more of that in the following issues.

And if whether or not the Clorox will have a part to play as Private Detective Satya Chatterjee tries to find out who took out Denzin, her mentor. Someone she used to work closely with before the Plague hit and Newspapers like The Herald ended up folding once it arrived. Now my first guess as to who did the deed where Denzin is concerned would be Mayor Wilkes, someone we’ve only heard about and have yet to actually see in person aside from a picture of him in the Herald. But that would perhaps be too on the nose with him but he just as easily could’ve hired someone to do the deed for him. Again, perhaps too on the nose as it literally could be anyone who might have wanted to do Denzin in since he was all about reporting the Truth. The mystery is one I look forward to seeing be unveiled as time goes on in this story, though it seems like Satya has some troubles to get past before all is said and done! BIB’s first issue was enjoyable for me and the creative team all did great on it in my view as well. With that said, let’s bring on issue 2!

Summary: The future. The very concept of truth has died. Politicians invent their own facts, and independent newspapers no longer exist. In this world, private detectives serve as ronin, searching out the hard truths that people are desperate to keep hidden.

The best of these is Satya, known as Lady Dick, a former journalist turned gumshoe who runs every lead to ground. But Satya has just received her hardest case yet: her old editor has been murdered. Someone wanted him silenced, and the trail points toward the highest bastions of power. To find justice for her friend, she’ll have to put everything – and everyone – she knows at risk.