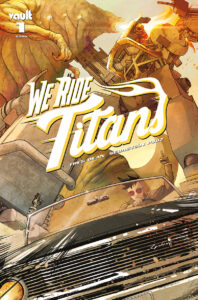 When I saw an email today from Vault offering up their latest books for review, We Ride Titans caught my eye. Because hey, Kaiju and Giant Robots? And a dash of Human Family drama? Ya just can’t go wrong with that, folks! Plus, its been awhile since I covered a Vault title and this was just perfect timing. I like that Tres Dean focuses on the present for this first issue instead of doing anything origin like while at the same time, getting questions you’d like answers too. Questions like: Is this set on Earth? Or another planet entirely? What got the Kaiju coming after these folks and how long did it take them to come up with the Titan Defenders? How’d Kit Hobbs meet her lady love? Questions that we might get answers too later down the line or we might not. And even if we don’t, I’m fine with that as Tres Dean and the crew set up things pretty well in this first issue. Though Godzilla himself would probably roll his eyes over everything considering how things got handled in our first experience here of Giant Robots and Kaiju going at it.

Which interestingly enough, the fights are considered routine and that’s kind of an alarming view to have and makes me glad I don’t live in New Hyperion. I like that Tres isn’t making things be all super happy and the like and is instead, showing the reality of things and why long term pressure in more than one way is bad for you. Something we get to see with Kit’s brother Dej, the current operator of the Defender Nexus. He also makes a case for why you shouldn’t pilot a giant Robot and fight a Kaiju while drunk. A lot like how you shouldn’t drink and drive. And from the looks of things, I think the family (parents yo) is a little arrogant and too stubborn for their own good and its causing problems. Its likely why Kit left and doesn’t have much to do with the family and why Dej has become a drunk. Sebastian Piriz captures expressions perfectly with the characters and I look forward to seeing more of that in upcoming issues, along with the talents of Dee Cunniffe and Jim Campbell.

I’m looking forward to seeing what happens next, especially with Kit having to get involved. I can only imagine the drama that’s likely to occur between her and her dad and that’s likely to be more explosive than another fight with a Kaiju! We Ride Titans is out on the 12th so don’t miss out folks!

Trying to keep your family from imploding is a tall order. Kit Hobbs is about to find out it’s an even taller order when that family has been piloting the Titan that protects New Hyperion from kaiju for generations. Between a spiraling brother, a powder keg of a father, and a whole bunch of twenty-story monsters, she’s got her work cut out for her.