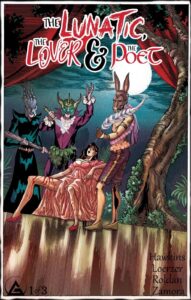 For some time now, Brian Hawkins has slowly been making a name for himself in the Indie Comics world with the likes of Black Cotton for Scout Comics, Devil’s Dominion and Wilder for Blackbox Comics, Dark Watchers/Gretel and Van Helsing for Zenescope. In addition to that, he’s also been one of the excellent editors for the Mad Cave crew. And his latest offering, The Lunatic, The Lover, And The Poet, is the latest from the man. LLP’s first issue was also successfully funded on Kickstarter with the second issue currently on there looking to get the same success and is already at a thousand dollars of its 4,000 dollar goal. Now things start off in this first issue with a murder that easily could’ve been a double murder but didn’t go there for some reason. As a murderer leaving a witness alive is just a bad idea but there easily could be more going on here than at first glance. But I just as easily could be wrong but either way I am looking forward to seeing the layers be peeled back as time goes on for this title. One thing(s) I noticed rather quickly in the aftermath is that stress, anger, and outright mourning/sadness are naturally happening.

But its not quite to the extent one would expect those feelings to be as it only involves a few people such as two key figures in the play that’s in the works, Lexus’ family (though we only really primarily see her Uncle with some over the phone dialogue from her father), and Lexus’ boyfriend and bestfriend. Whom are messing around and are bound to be suspects in her murder once their fooling around is uncovered. To me, the stress exhibited by Xylerpher and Sierra (Sierra being the one who came across what was going on with Lexus) just feels kind of wrong. As they, though more so perhaps Xylerpher, are worried more about the Midsummer Night’s Play and how best to handle things now that Lexus is dead. And to be honest, I have my suspicions about our boy Xylerpher but that’s probably something Brian wants us to have in order to keep us in suspense until the real reveal happens. Again, I could be wrong there and how we’re introduced to Xylerpher initially could have just as easily been about something else. With Lexus’ family, there’s the heavy impression she’s from a pretty well off family and given we don’t know a lot about our dearly lamented gal, she might not have even been all that liked by everyone else.

Which might explain the boyfriend and the best friend fooling around and out of the two of them, only one of them is legit upset about what happened to Lexus. Brian and the team have a good start here and given how things end with our killer going after someone else, this guy isn’t just aiming for a one time thing. And likely could be going after everyone in the play but the why is just only part of the mystery we’ve got here. A mystery I’m looking forward to seeing unfold! I also gotta add that I thought Artist Marcio Loerzer and Colorist Gabriel Roldan did especially great with their respective jobs when it came to the more darker portions of this first issue and I look forward to more of that in the rest of the series. Which, as I mentioned earlier, is currently on Kickstarter for its second issue with a 4,000 dollar goal and has so far gotten 1,169 dollars with 29 days to go. So if you love Murder Mysteries and Slashers, this is a book that WILL be for you! 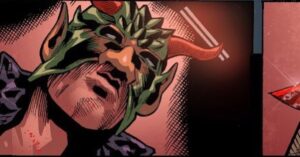 Summary: A small town school of the arts attempts to put on a modern rendition of Shakespeare’s A Midsummer Night’s Dream when the lead actress is murdered. The search for the killer ensues and everyone in the cast is a suspect.