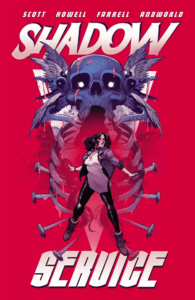 This reviewer can’t be the only one to have noticed a widespread propensity for comic books to read like thinly veiled appeals for television and film adaptation.

In that respect, there’s a distinct whiff of ‘option me, option me!’ to Shadow Service, the new Vault Comics offering from Cavan Scott (writer) and Corin M. Howell (illustrator). With colours by Tríona Farrell, letters by Andworld Design, and design by Tim Daniel, Shadow Service does make a decent case for itself. You can see why this might appeal to any production company on the hunt for fresh ‘graphic novel’ meat, given Shadow Service takes place in a well-realised and properly thought through world which blends multiple genres in exactly the sort of intersectional manner which makes it ripe for mass-audience appeal.

There’s an interesting cast of characters (pleasingly diverse in life experience and perspectives), a lead you can get behind and a high concept which lends itself well to serialisation. There’s a flavour of Buffy The Vampire Slayer, a shade of The X-Files and a smidgen of 1970’s espionage thriller in the mix. There’s a liberal sprinkling of gruesome and graphic gore, plus a healthy dash of strong language, too.

The story follows Gina Meyers, a witch who offers her services as a Private Investigator on the streets of England, battling demons on behalf of others whilst refusing to confront her own. Gina finds herself dragged kicking, screaming and entirely unwilling into the world of ‘MI666’, Britain’s ‘secret’ Secret Service, a world of spy-craft, betrayal, subterfuge and suspicion. Can Gina work with the mysterious operatives of Section 26, in the name of the ‘preternatuaral defence of The United Kingdom’?

Split into five chapters, this 113 page Volume 1 affords itself plenty time and space in which to unravel its tale. It’s somewhat disappointing, then, that a writer of Cavan Scott’s undoubted talent and relative experience seems somewhat tentative, hesitant and clumsy in the introductory chapter. The pacing, as you’d expect form a writer of Scott’s calibre, is mostly fine and dandy. The exposition is noticeable and could be handled more deftly, but it’s hardly offensive and the opening pages of most comics are inevitably more expositional than others. That we get an origin flashback for our main character so early into the action, though, feels especially jarring. One expects greater confidence from a writer like Scott, who would have been better served to weave this in with a greater degree of patience, allowing the strong character he has crafted to endear themselves to the reader through their characterisation, which is solid. It almost feels like Scott worries we won’t connect to the character, won’t empathise with or root for them, without establishing pathos through a harrowing childhood flashback which comes right out the gate. It really ought to have come later.

Indeed, Scott manages a much more skilfully woven dovetailing of flashbacks with his supporting cast later in the book, particularly with Coyle, an excellent character-concept whose back-story is wisely held back until much later into the story, and all the better for it.

Following the rather pace-jarring flashback in the middle of chapter 1, Shadow Service starts to really hit its groove. The tangible sense of confidence oozes from the page as the creative team surge through their story with a deftness of storytelling that makes the initial bump in the road all the more conspicuous in an otherwise smoothly paced, well thought through and conceptually strong comic book.

And hey, if the concept and writing flirts shamelessly with television/film adaptation, the art is most assuredly secure in Shadow Service’s status as a comic book. Corin M. Howell clearly enjoyed themselves on this book; the character work, the design aspects, the tremendous page composition and creative panelling illustrates just how effective the comic book can be as a storytelling medium. You don’t get this level of visual creativity on a screen, that’s for sure.

Tríona Farrell’s colouring work enhances the page brilliantly, adding an otherworldly hue to the horror moments, a suitably grim tone to the street scenes and a sheen of sophistication to the Sci-fi sprinklings when we dive deeper into MI666.

Quill, Edwin, Coyle, Aashi and Hex represent a very strong support cast, all of whom merit further exploration, but Gina anchors the narrative well. One can only wish that they had held off on the flashbacks until chapter 2, a point from which they are much better implemented throughout.

I could hum and haw about an iffy start, grumble about a few moments of off-putting self-awareness (we don’t really need the Doctor Who reference lampshaded) or quibble with the odd bit of clunky dialogue, but in Shadow Service we have a solid comic book that strikes a balance between a cavalcade of genre, one which gets stronger and more self-assured with every passing page. One which recovers from an initial stumble to engross the reader with a story that promises even better down the line.

Shadow Service Volume 1
Written by: Cavan Scott
Art by: Corin M. Howell
Colors by: Tríona Farrell
Letters by: Andworld Design
Design by: Tim Daniel
Covers by: Corin M. Howell, Nathan Gooden and Tim Daniel
Review by: Andrew Duffy
Summary: Worried your partner is cheating? Need a missing person found? Gina Meyers is the Private Investigator for you. Sure, she’s a witch who worries that her powers make her more of a monster than the crooks she’s trying to catch, but it’s not like London’s criminal underworld is literally going to hell… is it? Spycraft meets black magic in the shadowy world of MI666.
← Previous Post
Next Post →