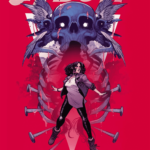 This reviewer can’t be the only one to have noticed a widespread propensity for comic books to read like thinly veiled appeals for television and film adaptation. In that respect, there’s a distinct whiff of ‘option me, option me!’ to Shadow Service, the new Vault Comics offering from Cavan Scott (writer) and Corin M. Howell […]