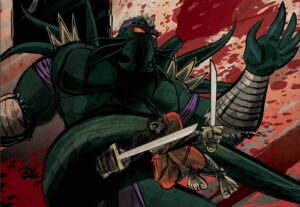 1. Hello there, and welcome to the Mind Meld here at IndieComiX! For those who may not be aware of either of you and what it is you do, could you tell us a bit about yourselves? 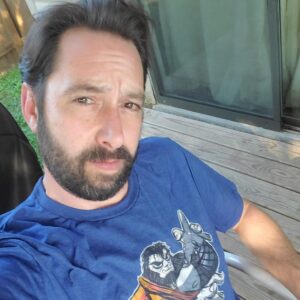 I’m Dan Price, creator/co-writer/artist of BIGFOOT KNOWS KARATE. I have worked in indie comics on and off for 14 years with creator-owned titles such as Latex Avenger, Masters of the Obvious and Excelsi-ish! for the Stan Lee Foundation. I’ve also contributed to titles such as Halloween Man by Drew Edwards (covers, interiors) and Guano Guy by Mark Darden (covers). I am also a co-writer on the upcoming Halloween Man Meets Latex Avenger crossover coming in 2022 with Drew Edwards and Paulo Hernandez.

Hi. My name is Casey Allen and I’m co-writer of Bigfoot Knows Karate. My other comics experience includes working as Editor and writer for the online comics workshop The Comic Jam (www.thecomicjam.com) and as writer and co-creator with artist Pete Woods of the supernatural horror comic Voodoo Chile. I have also written and conducted interviews with comic pros, as well as actors and writers, for the entertainment podcast Spoiler Country (www.scpod.net). I live not quite in the middle of nowhere in central Alabama with my wife and two kids.

2. The two of you currently have Bigfoot Knows Karate on Kickstarter, how’d the concept for that come about?

Casey: So the initial idea came from Dan. In fact, the entire concept of the story came from Dan. He had created this Bigfoot character and folks on Instagram really got into it. I kept pestering him to do something with it because we both knew he had something. It was just finding the time to do it. My involvement was principally in the role of editor, but I kept making suggestions on the story and helped to create issue one’s main villain Kungfuthulu. When the time came, he came to me with an outline for the series and a nearly completed script. I then went in and added my two cents, made some suggestions and the filled gaps.

3. Its mentioned that we’re seeing the first chapter being funded on Kickstarter, how many chapters/issues do you guys intend to do for the series?

Casey: We have five issues planned for the main series and possibly two one-shots that involve the characters from the main story arc. I’m really excited about our first one-shot that should take place between issues 2 and 3. It’ll be featuring art from Adam Caswell.

4. How wild can readers expect the series to get? Especially with a Chtulu involved?

Casey: I’m glad folks like the Kungfuthulu character, but he’s only going to be a small part of a larger story. He’s not even the biggest badass. I love writing him, but he’s just the tip of the iceberg of the ass kickings that Bigfoot is going to give and receive. I wouldn’t worry, though. He will be appearing later on in the series. I don’t want to give too much away, but a common term I use to describe where we are going in the story is “bonkers” and I’m doing my best to live up to the term.

5. Given the shortage problems currently going on with supplies like paper, do you guys expect there to be any problems in getting physical rewards out to backers when the time comes?

We have been keeping our eyes on the paper shortages and it is a concern. We are actually planning for the print/shipping of the book to happen after the holidays when, hopefully, those concerns are alleviated.

6. For Casey, I’ve heard of The Comic Jam in the past thanks to Derrick Crow and as you mentioned it being an online workshop for comics, how’d that come about?

Casey: Oh cool! Derrick is rad. So, The Comic Jam started on Reddit r/comicbookcollabs with an amazing guy named Aaron Miller. He started everything from the ground up and got the ball rolling. I joined maybe a month or two into it’s initial inception. I eventually started taking a leadership role within the group and we are still going strong after about five years. Every week we choose a theme to write a one page comic about and when those scripts are written based on the theme, we then pair those Scripts with artists. It’s always fun seeing where the teams take the subject matter and really rewarding seeing the growth of talent in our creators as they participate in the group. We’ve got a few interesting things coming up next year that are going to be BIG. Keep your ear to the ground. We should be making announcements soon. 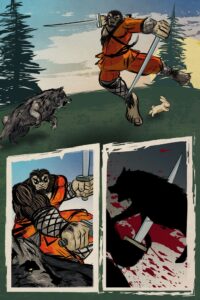 7. Another for Casey, what can you tell us about Voodoo Chile?

Casey: Voodoo Chile is a five-part supernatural horror series that I’m doing with the British artist Pete Woods.  It’s about an American soldier during the Vietnam conflict learning that he’s been chosen to be the living embodiment of death for the Voodoo Deity (Loa) Baron Samedi. He accidentally kills his only friend in Vietnam and now has to live with his disembodied spirit taking over the bodies of the recently dead, and considering he’s in a war zone, there’s a ton of folks for him to inhabit. It’s about destiny and agency. It has a lot to do with identity, and there’s a ton of gore and zombies. We just funded issue two and I’m writing issue three. 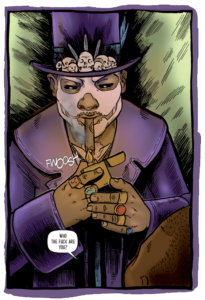 8. For Dan, you mentioned the upcoming project called Halloween Man Meets Latex Avenger in 2022, any details about that you can share?

Dan: Drew Edwards is the creator of Halloween Man and it’s happening as a HM one shot. Drew and I collaborated on the story, mostly it was Drew, and I co-scripted the book. Drew scripted Solomon and Lucy, and I scripted Latex Avenger and Reuben, The Spermicidal Foam Lad. Our good friend Paulo Hernandez is handling the art chores. It’s going to a LOL-fest, PG 13-style. 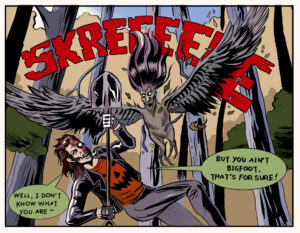 9. Its mentioned on the KS that it was 4 years before things got going with Bigfoot Knows Karate, what were the factors involved in it taking as long as it did?

Casey: Haha! I think there was a chorus of people (myself included) that were telling Dan to “just make the book already”. Dan had the character in his head, but he’s from the comedy comics world, and the story he wanted to tell was far from comedy, though it does have its funny moments.

10. As for my final question what advice would you guys give to those looking to get into the Industry?

Casey:  I got into making comics because I found a group of folks that pushed me to create. My first piece of advice would be to find a group that supports and pushes you. Not only will you learn the ins and outs of making comics, but you’ll also make friends that are going through the same process. i often tell people that the point of the comic jam has been to allow our creators to not only have a seat at the table, but to build the damn table themselves. 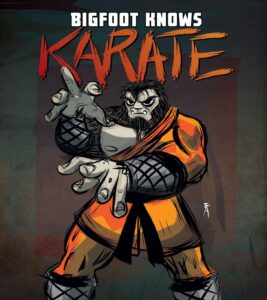 Secondly: Stop talking about it and get to work.  Everyone has an awesome idea for a comic, but how many people actually put pen to paper? Not many. You have to be the prime mover in getting your idea out there. No one is going to do it for you, and when you do finally get your idea out there you have to sell it to people. Learn to market yourself. Make yourself seen.

Editor’s Note: Huge thanks to Dan and Casey for taking part in this interview! Bigfoot Knows Karate is currently at 6,430 dollars of its 1,000 dollar goal with 4 days left to go. Which means plenty of time left to get in on the fun!