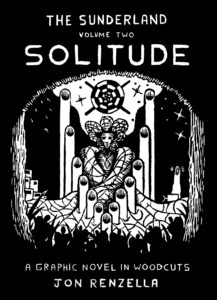 Solitude is the second volume of The Sunderland trilogy. As with the first book, Schism (2015), I created it entirely in woodcuts with digital text. It explores a world in which the major ideological subcultures have physically separated from one another, and the collective dissonance that ensues when an unexplained phenomenon occurs that each group interprets through its preexisting worldview. It is a commentary on both the current political and social climate as well as the human condition writ large.

Information on and reviews of The Sunderland Volume I: Schism can be found at https://booklife.com/project/the-sunderland-volume-one-schism-7380 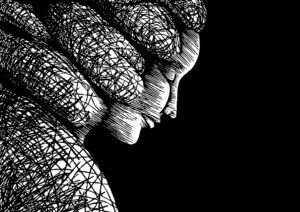 Years before the Schism shattered society into ideological seclusion, the Solitude tore apart the bonds of trust, leaving the culture shocked and dazed by the viciousness perpetrated in their name. Now, the scattered subcultures of the Sunderland find themselves grappling with a legacy of isolation.

With the ever-present Conduits serving only to validate each group’s self-righteous mission, society is driven into conflict once again. The vast underclass can do nothing but watch as the motivated few each bring about their own understanding of the end…

Jon Renzella is a professional woodcut, comic and tattoo artist. Originally from the US, he has lived in Taiwan since 2008, where he has run the non-profit art space Lei Gallery since 2010. In addition to exhibiting his works around the world, he has received multiple residencies and awards. His work can be seen at www.jrenzella.net