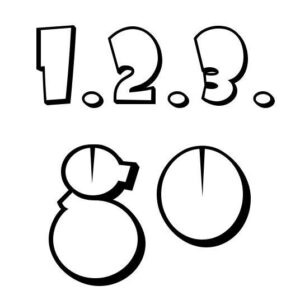 From a bit of history to a few hopes to a current Kickstarter, its time to 123GO! with Phoebe A. Xavier!

1. Hello there, and welcome to the Mind Meld here at IndieComiX! For those who might be unfamiliar with you and what it is you do, could you tell us about yourself? 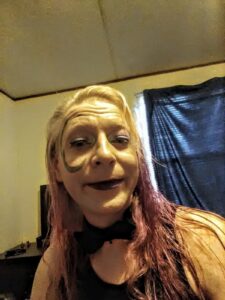 Sure. Hi everyone in internet world, I’m Phoebe A. Xavier and I am co-founder and Editor-in-chief of indie comic book brand 123GO! I’m currently in Philadelphia where I’ve been for the last year. I’m a writer, editor and letterer.

I had a small team that was working with me on my first book “Sidereal Apogee“. Mostly people that I found through Facebook Comic Book forums. Eventually when we started developing other titles beyond the Sidereal universe I wanted to keep everyone I was working with on the same page and not have 3-4 different FB groups. So I pulled all projects and creatives together under 123GO! Publications private FB group where all active parts of the team interact and share ideas and WlPs.

“123GO!” was the way I’d sign off a lot of my posts , like “123 Get To Work!” And I liked it as the name of the brand. It was probably “Gunmetal Black Ops” #1 which introduced Malek Ha-Masshit + Black Cauldron & Jade Lion which really made me think ‘OK, it’s time to have an umbrella over your titles, it’s not just one the book we’re doing anymore.‘ Both of those stories continue this month by the way. Jade Lion & Black Cauldron are back in GBO #2 and Malek’s second issue is on Kickstarter as well.

3. Are there any plans for a shared universe? Or just intending to keep things separate? 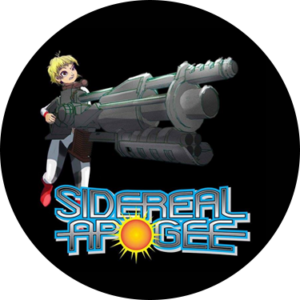 OK so everything in Sidereal Apogee is in a shared Universe/timeline. Trouble takes place in that Universe as well. The B & C story in GBO #2 take place in that Universe. Malek is mostly in his own Universe. We do have some future plans for the character to exist after his 6 issue run is over but that will probably involve Universes interacting with each other. There’s a vastly different mood in some of these books so I don’t want to integrate them too much. Oh but – “ESC POD” in 13th Moon Volume One, that also takes place in the Sidereal Apogee Universe. You can usually tell you’re reading one of those stories if it tells you where in the Solar System and what year “Terran Standard” it takes place in, in the intro caption box.

13th Moon Volume Two will feature a Malek prequel tale. It will not feature anything in the Sidereal Apogee Universe though. 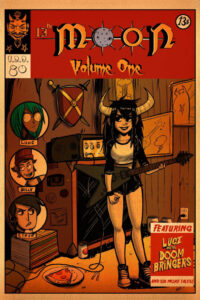 4. Sidereal Apogee is a unique name, how’d it come to be?

I was writing short stories with titles like “Roche Limit” and “Foul Ouroboros” when I was first developing Sidereal Apogee. For me the title of a story is one of the most important aspects. I’m big on branding. Sounding cool is a good indicator it IS cool in my methodology. If the title doesn’t get you excited or at least curious then why bother? So I picked a relatively obscure science term that to me could translate to “far out in space” if we simplify to layman’s terms, or even “furthest out in space.” Cause these are wild stories that take place in an age where space colonization is in full swing, even though so far they’re mostly limited to the Solar System 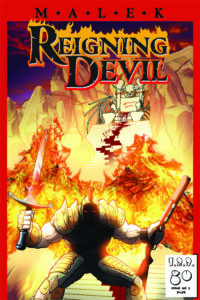 5. Speaking of Malek, there’s an upcoming Kickstarter campaign for the second issue, what led to the decision to go that route for the title?

Malek #1 was going to launch on Kickstarter, but CoV19 happened and everyone thought it best to not do a KS campaign last April. So this issue it’s getting rolled out on that platform. The writer and creator, Jeffrey Haas, is running the project through his Vector Comics account. I’m hoping to see increased popularity of the title after this. Super excited to see it find a wider audience. Jeff’s already written issues 3 & 4 and it gets a lot more interesting once all of Hell bows before their new Master.

6. What can you tell us about some of those wild stories in Sidereal Apogee?

Sidereal Apogee is filled with characters that also feature in my Sci-Fi short stories. They are usually occupying the grey area between good guy and bad guy. Sometimes they’re straight up villains like Theory in issue one or Grace Atrophy in her appearances. Others like Aurora Phlox are criminals trying to reform themselves and make a better life. The stories hop around from the 2450s to the 2460s mostly. Issue #5 did feature a father back flashback to complete a tale that encompasses the B story in issue #2 though. 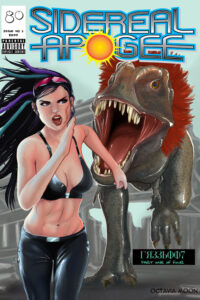 7. Ooh, any hints you can give about the oncoming craziness of the Malek title?

As the fans will find out in July, Malek does in fact Reign in Hell. Which will leave him bent on taking the fight to Heaven, especially since they have tried to defeat him in Hell twice now in the first two issues. The problem we’ll find in issue #3 is that while Lucifer had a plan on how to enter Heaven with his legions, Malek lacks the insight into how to pull that off. So the next volume, which i think comes in at 38-40 pages – almost a double sized issue, will be a quest to unlock the stratagem that the former Devil had planned. It’s a fun ride I promise.

8. Well, that all definitely sounds very exciting and I for one am looking forward to seeing things for Malek unfold. Where do you hope to see 123 GO! within the next five years?

In five years I’d like to see 123GO! putting out more books at a more regular rate. A lot of what we do is a labor of love. One some projects the only paid talent is the line artist. I don’t make a lot of money doing this. I am am thousands of dollars in the red over the last 5 years if I were to tally it all up. But I’ve made 11 comic books in that time and have at least five more in development, plus contributions to other people’s anthology projects. So I guess I’d like to increase our visibility when Cons come back and find enough of a fan base for more of the team to be doing comics as their day job. I keep 123GO! designated as a brand, not as a publisher, for the very reason I’d license our books under a bigger company if they’d distribute us as an imprint. I am keeping options open.

I am trying to not be too much of a niche player, keeping the team versatile in many styles and genres. But OK, in 5 years, Trouble & Malek should both be done in their initial mini series runs; both characters will have future stories still. Sidereal Apogee should be up to like #14. A series I have been developing called “Hecate” should see the light of day. GBO should be up to like #6. And maybe we’ll have 5 or 6 volumes of 13th Moon. IDK, stay tuned. Buy the Ticket, take the trip. =] 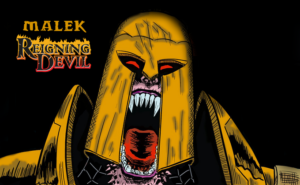 Oh, and in 5 years there should be at least one Oko Murasakino graphic novel. She’s a story-in-a-story icon that debuted in Cammry Lapka’s manga magazine she did in early days of the quarantine. Oko is actually Tamika “Trouble” Kennedy’s favorite comic book character as we will discover in Trouble #2. 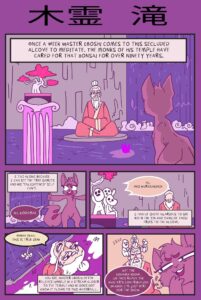 9. As a small press company, how hard has the Pandemic affected y’all?

Well we did put off Kickstarting Malek #1 and Trouble #1 because of it. On the other hand it pushed me to settle in one place for a year to work a day job that helped increase output in the twelve months. Sidereal Apogee #’s 5-6, Gunmetal Black Ops #2, 13th Moon Volume One and Malek #2 all got done in the afterafter CoV times. I also did another story with Federica Ditizio in that time for Caleb Palmquist’s next Modern Mythology anthology. Plus, am half done with a Florida (m) Anthology story with Roel Torres. That plus I found an editor for my narrative fiction that I vibe real good with – we’re polishing up my short story collection which will drop as a book hopefully in 2021.

Joseph Cervelin is no slacker and I’m learning a bunch about writing from him as he chops words out of my stories. So hey, I’m vaccinated. Fuck with my comic books. They’re good. Bet. 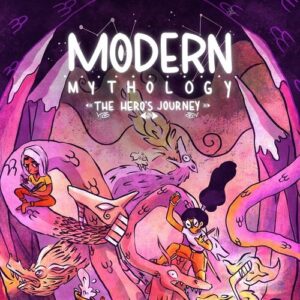 10. And as for my final question, what advice would you give to those just starting in the industry?

My advice for people starting out in comics varies maybe by what their skill is. Writers: develop a budget for a talented art team. Maybe learn to letter like I did to cut down on costs. Admittedly my letters are a WIP, but I get better every year. Artists: build your portfolio and only take paying gigs. 50% up front, 50% on delivery. And for either side of a creative team: expand your influences. Absorb the type of media you want to create. You’re not gonna be a very good Cyberpunk writer if you’ve never seen Bladerunner, never read Gibson. Don’t chase the talent of your heroes, just be inspired by them. Find your voice/style. Hope that helps. Check out the Malek Kickstarter and if you have an idea you think might have legs? Then 123GO!

Editor’s Note: Many thanks to Phoebe for taking part in this interview! Malek #2 is at 524 dollars of its 775 dollar goal with 25 days to go!