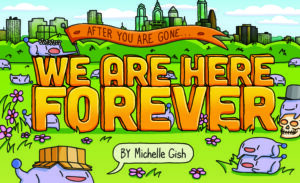 Awhile back Lost N’Comics asked the question about how to get and keep youngsters interested in comics for a video of theirs (hit the 1:21:46 mark for that discussion) and its had me wondering the same thing ever since. To the point I wanted to do a recommendations write up and this essentially is that after spending my Thursday night doing some reading on several titles just right for those young whipper snappers out there in the world. And first up in that is Michelle Gish’s We Are Here Forever, a title I was actually sent several years ago but never got around to reading for one reason or another (as is the case quite a bit with me unfortunately) until finally sitting down to read tonight. WAHF is based on the very same Tumblr webcomic and features a world where Humanity is gone and in their place, a race of intelligent (well for the most part) beings known as the Puramus. This was a pretty enjoyable read as we got to see the Puramus in various situations, like King sending out three of his questers to find certain objects for example like a Skateboard that King refers to as a Flarg. 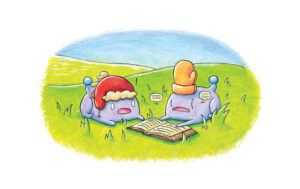 Now, while there’s plenty to see in this printed version of the strip, it doesn’t show everything but nicely enough we have the web strip for that. Like how King becomes King for example and it just really fits in this world of Michelle’s. I really enjoyed this look at an interesting post apocalyptic world with a new race of (adorable) beings instead of the standard humans surviving and doing what they have to survive thing. These guys are also fairly quick to realize that war is crap and that talking things out is just way better for your health. A lesson for us to learn me thinks from these guys! Michelle even teases us near the end of what might have caused Humanity be wiped out and at some point I’m gonna be checking out her web strip to see if she explores that more as I’m sure that’ll be a ton of fun to read! 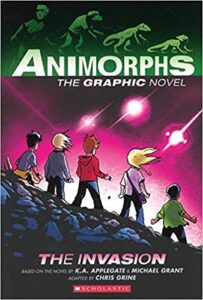 Now chances are you may have been a fan of the Scholastic book series known as the Animorphs by K.A. Applegate and her husband, Michael Grant, when it was first originally put out for us to read while growing up. Or perhaps, you found out about the series later in life. Possibly from the Nick ran live action series that happened for a time back in the day. Or even when they announced a movie about it about a year or two ago. But if not, fear not my friends! For in recent times, Scholastic’s Graphix line has chosen to adapt the books into Graphic Novels with Chris Grine helpfully providing the illustrations, giving new readers and old readers a chance to check out the series in a new way. Animorphs features Jake the leader, Vet Doc in the making Cassie, Cousin Rachel, Marco the joker, and Tobias the Hawk who used to be a boy. A group of five kids who end up with the power to morph into any animal or person by taking a bit of their DNA into themselves via a special piece of Alien technology for the means to combat against an Alien threat known as the Yeerks thanks to the Andalite known as Elfangor. Now one can think of the Yeerks as basically being like the Goa’Uld from the Stargate universe. 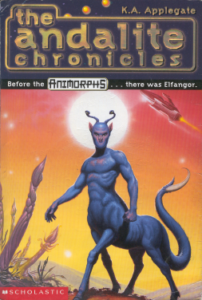 Except… Less inclined to considering themselves as Gods but still all too willing to enslave others for their own ends. The Andalites themselves came up with the Morphing tech and only one Andalite has been over taken by a Yeerk, which gained him the rank of Visser Three. Now, this adaptation managed to do something that not even the book series (at least until later anyway) and the tv show was able to do. And that was show just how horrifying it is to pull kids into a clandestine war with no one they can really turn too except one another. The GN even goes the extra mile of showing us just how much pain Elfangor’s in during his first and last ever meeting with the kids. The fact he’s enlisting children is likely only adding on to that pain but given his culture’s ways, that might not even be a thing to be concerned about but I could be wrong. Chris does a fantastic job with the art here, though I would say he perhaps should have gone for a different hair color for Tobias so that he’s not a Blonde like Rachel is and potentially causing confusion between the two. Though that kinda later becomes less of an issue considering the state Tobias ends up in by the end of the book.

I love that Chris doesn’t shy away from allowing us readers to see the morphing sequence when the kids morph and as some recall, that can look pretty creepy from time to time. But now its something we’ll actually get to see instead of just reading about it and only having a description to go on. Now how far into the series the GN adaptation is going to go on is anyone’s guess but I’m hoping it’ll happen for the entire series, the extras as well. The second book is said to be coming out in 2021 during October and will be from Rachel’s POV. That’s another thing about this series, each book is primarily told from the perspective of one of the characters and getting to see that in comic book form is gonna be really great to see. Chris also seemed to have made the choice to make the Taxxons look less frightening, probably a good choice considering this is aimed at a younger audience and Taxxons are a Cannibalistic worm like race. And I’m curious to see how much of that will be adapted here. But given some of the less pleasant moments we see in this adaptation, its likely he won’t be shying away from the more unpleasant aspects of the Taxxons. 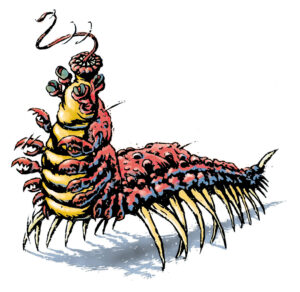 Now, just because this is aimed at a younger target audience doesn’t mean you adults out there should shy away from this. As you no doubt will enjoy this and feel a great deal of sympathy for Jake, Marco, and Tobias given their respective issues that crop up in this story. With that said, hurry up October! 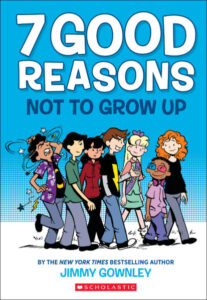 Another title of the Scholastic line of Graphix titles is 7 Good Reasons Not To Grow Up by Jimmy Gownley, a really fun read with some amusing homages to Star Wars at times and a little bit of heartbreak where young Kirby’s concerned. Whom is well liked by everyone at Greycliff Academy for a number of reasons, but the main one being that he’s always willing to help out others, even if it is as a favor for a favor kind of thing with his main opponent being the Principal himself. Which with him is where quite a few of those homages I mentioned before tend to happen. Each character seen in this story and the interactions between one another are all done really well and I for one would love to see an adaptation in either live action or animation of this title. Raj’s occasional exasperation with Kirby is amusing to see but it never causes serious issues thanks to their best friend status. Even when Kirby basically gets the girl Raj is in too and I’m glad Jimmy chose not to bother with any romance drama where that’s concerned. 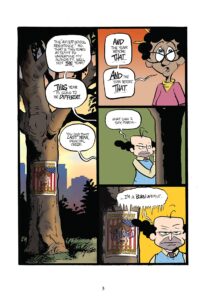 Little too much of that in some things as it is! I love how each of the 7 reasons Kirby talks about in each video for why you don’t want to grow up tend to relate in some way with various things that happen in this story. With the final one being related to Death and it basically being a way to end the mystery Kirby has about himself. Something I honestly hope we get a sequel for given what he ends up doing at the end as I’d love to see how that reunion goes! 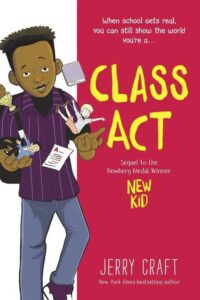 Jerry Craft’s Class Act from Quill Tree Books, an imprint of Harper Alley/HarperCollinsPublishers, is the story of Jordan, Drew, and Liam, three friends who attend the prestigious Riverdale Academy Day School. A school that’s not in the Bronx but actually is with some not wanting to actually say it aloud for one reason or another. Now, while this targeted for a younger audience and the over all subject matter may go over their heads, I have to say, reading this made me feel a little uncomfortable due to the topics of Race, Ignorance, and Social Class being heavy themes here. Which might have been what Jerry was going for if those older than 12 are reading Class Act. A title that admittedly drew me to the book mainly because I was reminded of a film from the 90s called that same name and forever left me with a memorable quote from that movie courtesy of a bully that was in it who said it. ‘Reading is fundamental’. But despite the themes I mentioned and the uncomfortableness, I really did enjoy reading the story.

Though I strangely felt like this was more centered from Jordan’s perspective half the time instead of Drew’s since the summary does imply Drew is the main character. I gotta admit that its disheartening to see Jordan’s parents not being all that supportive of his ambitions for being an artist and its not exactly clear on why that is, but he’s clearly got some talent from what we see here and there. And at the end of the day, Liam’s a kid who just needs his father in his life and over all for his parents to be a little less argumentive. As for Drew, he’s definitely got some struggles, internal and external to deal with due to being African American and going to a privileged school and perhaps having to worry about his waist line thanks to some baked goods courtesy of a girl! Said privileged school being where a deep understanding is seriously needed and is slowly happening.

Drew’s good at Basketball but doesn’t want to be on the team, likely because he’s worried about getting stereotyped and well, I can see where he’s coming from. 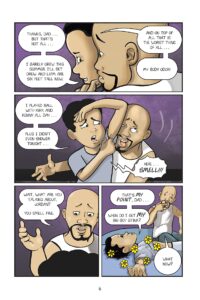 His and Jordan’s visit to Liam’s later on as we see is another part of the struggle we see this kid deal with and how it almost destroys a friendship because of the clear difference in Social Class between himself and Liam thanks to how caught up he gets in his thinking about things and how unsure it makes him. How this might come into play later on in their lives is anyone’s guess but if Jerry chose to write more with these kids I’d be down to read it. Heck, like with 7 Good Reasons, I’d be interested in an adaptation of this for the screen. Both would fit great as a series, even if its likely both would just be one season each. Ultimately, I think in a way, this book proves that just because you have to deal with a certain set of circumstances, it doesn’t mean you have to let yourself be defined by them. Though its easy to lose sight of that when dealing with every day life and the process of growing up.

Thanks all for reading, this is Rob Wrecks signing off!