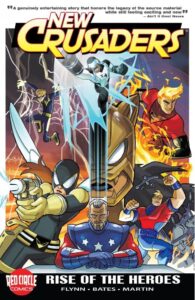 Sometimes, there just isn’t enough time in the day or the night for that matter to really dive into reviewing this and that. Especially if you have a big reading pile that keeps on expanding for one reason or another and that’s why I’m gonna try the James Blundell approach (though he’s unlikely to be alone in this approach and now that I think about it, helped remind me that one can do this) and talk a little about a few comics. And first up is Red Circle Comics’ (Dark Circle now) New Crusaders: Rise Of The Heroes, a title long time readers of IndieComiX may remember me covering way back in 2013 with the first three issues. Ultimately… This story was good but the potential it had for a long running series was squashed for whatever reason and that’s just ultimately disappointing. Though a law suit for rights to a character may have had something to do with that. Now Dark Circle is focusing on the likes of the Shield and other older characters from back in the 40’s instead of the legacy characters and that feels like something the Big 2 would do in a move to put the status quo back to a certain way. 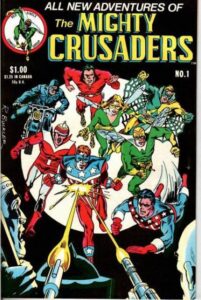 It would have been great to see the Shield have some character development and realize that certain methods like rushing into a bad situation with an untested team just isn’t a good thing to do as the fate of one character can attest too. But sadly, we’ll never get to see that unless the folks running things make a return to the New Crusaders crew. Ian Flynn, Ben Bates, Alitha Martinez, Gary Martin, Matt Herms, Steve Downer, and John Workman are the creative crew for this title. 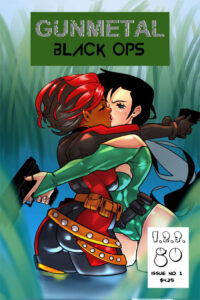 123 Go! Publications’ Gunmetal Black Ops #1, a title with two stories in one place. Which is always fun to see in my view! The first up being Blood Diamonds by Frederick B. Roseman and Phoebe A. Xavier, their tale involving two kickass ladies that double as lovers by the names of Jade Lion and Black Cauldron. Their mission? Retrieve a crap load of diamonds and show why its a bad thing to be a Pirate with backwards thinking! I’d like to read more about these two as we know little about the two but this none the less is a great starting point to the introduction of the two ladies. And fair warning, the violence is a little on the graphic side so hopefully you have a strong stomach! The second in Gunmetal is God’s Sword from Jeffrey Haas, Juan A. Almiron, and Phoebe and if you remember the time I covered Jeff’s Malek: Reigning Devil title, then you’ll be interested to know that this is the origin of events that lead to Malek’s current situation in Reigning Devil. The road to slaying Lucifer in God’s Sword is about as bloody and violent as you’d expect.

Especially as Malek begins to realize the truth of things by the end of the story thanks to Lucifer filling him in on things and his own slow realization of things in regards to himself. I’m looking forward to seeing what the second issue of Gunmetal Black Ops will have in store for us readers when the time comes. Who knows, maybe it’ll go beyond two stories! 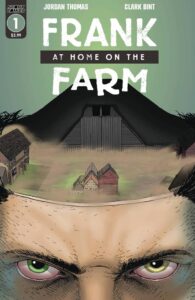 Scout Comics’ Frank At Home On The Farm is an interesting one as its part mystery/part horror and you’re just not quite sure what is actually real and what actually isn’t until the final pages in the 4th and final issue of the mini-series. The creative team behind this tale of horror and mystery is Jordan Thomas, Clark Bint, and LetterSquids. Jordan wonderfully keeps us guessing through out these 4 issues that is also in a twisted way, a take on Dr. Dolittle. You really have to feel for our WW1 Vet known as Frank as he just wants to be with his family at the old homestead after being in war and instead, is trying to figure out where the heck they are with no answers being easily gained from those in town. Talk about aggravating, right? Not to mention all the animals acting all weird and being a bit violent at times! Its enough to make a man want to go somewhere else for a bit to get a handle on things! But as Jordan shows us, not all is at it seems as the story goes on. Which is always fun and I enjoyed where he took the story. 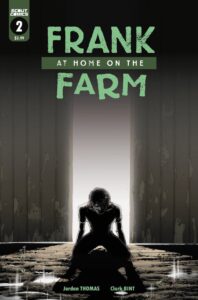 Clark Bint’s art providing that nice touch of gory and disturbing and why perhaps you shouldn’t trust a talking Pig that can sit itself at the dinner table. With that said, head here to get your hands on this series!

Now I’ve been meaning to cover this for awhile now since I read it and I figured now is as a good a time as any. What is it you wonder? Why none other than TKO Studios’ own Pound For Pound! Something I briefly mentioned in my review for their Sentient title around the beginning of last year. Gotta love how I take time to get around to things! Pound For Pound is excellently done up by the creative team of Natalie Chaidez, Andy Belanger, Daniela Miwa, and Serge Lapointe. All of whom, along with the others in this write up, are folks I’d happily follow the works of. As they’re all great and supporting those in the Indies just a really good thing to do over all. Pound For Pound’s got action, adventure, MMA, a Latina lead by the name of Dani Libra, mystery, heartbreak, and some cult shit. Oh, and some adult themes but don’t let that stop ya from enjoying this graphic novel! Now why this hasn’t been adapted into a movie yet (unless it has then ignore me) is beyond me but it needs to be! Same for Sentient as well though perhaps more so as a tv show.

But tv format could work for Pound For Pound as well. Blackouts and fractured memories can make life a bit difficult but Dani’s able to deal for the most part thanks to certain factors in her life like MMA, her sister, and her boyfriend. Or, sort of boyfriend anyway and you’d think with the blackout problems Dani has, she wouldn’t be so willing to do MMA but she doesn’t let that problem stop her from doing so. The fact there’s a certain color scheme involving a lot of pink and purple through out this book is something I like and I wonder if that was Daniela Miwa’s idea or Natalie Chaidez’s, or perhaps both. Now Dani’s MMA life is where the trouble essentially starts for our gal, mostly thanks to a dude with a height problem that doesn’t necessarily cause him any problems in the things he does considering the position he’s in. One can also blame Dani’s troubles on her mental issues causing her to not throw a fight like she was supposed too. But hey, if that didn’t happen, she wouldn’t learn a few truths and essentially heal in the process. 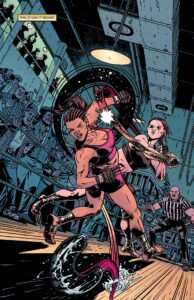 Pound For Pound also serves as a reason for why you shouldn’t bully others, as you never know what’ll happen. Like causing someone to turn into a Cannibalistic Cult Leader for example and being utterly screwed because he’s not that happy with you! This is a damn good story that sees Dani come out stronger in the end with her family and as well as getting to move forward with her MMA career. And while I could go on, I’d end up spoiling things and I don’t want to do that. Especially for those of you who have yet to read this for whatever reason but its definitely recommended you do!

Until next time, folks! This is Rob Wrecks signing off!