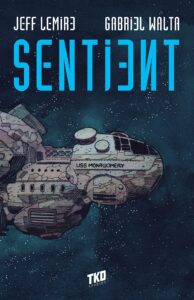 To my knowledge, TKO Studios started to come on to the scene in the world of Indie Comics more and more last year. Though I primarily saw this on Twitter so my knowledge may not be that great. But when an opportunity to check out several new releases in Trade/Graphic Novel format was given by the company, I couldn’t ignore it. Naturally, it took me awhile to finally sit down and read at least two of the books they sent me but damn were the two I ended up reading damned good reads that I didn’t want to put down at all. Sentient and Pound For Pound being the ones I read and I’ll be covering Pound For Pound at a later time. Jeff Lemire spun a high stakes tale within the pages of Sentient that even made me question one or two things by the end of the story. More on that in a bit! As its not often you see a group of kids having to be forced to deal with some truly crappy stakes that could easily get them killed if not careful.

And being stuck on a space ship miles and miles and miles away from Earth and from the colony they are headed towards, with all adults dead, and an AI that can only do so much, is definitely prime high stakes material! Of course, I could entirely be missing out on things like this kind of premise in whatever form but that’s okay. Because Jeff Lemire and Gabriel Walta have given me plenty enough in the form of Sentient. It should be obvious by now that trying to take over anything while its in the middle of transport, by water, air, or even in space, is just a bad idea. Guess perhaps Isaac’s mom never saw stuff on that sort of thing or she would have planned things out better! And you would think that these kids would be rallying together right away after such a big tragedy. Especially with the AI known as Valerie doing what she can to help them out.

But given what Isaac’s mom did, its only natural that mistrust would be an issue between the kids and Isaac himself. Mistrust that takes time to deal with and again, is only a natural thing. Otherwise, it wouldn’t have been that realistic and realistic is something Jeff is definitely going for here instead of cartoony and unrealistic. Now at one point, we meet a group from the Separatists that are a problem for this comic’s world. Along their own AI known as Victor and even without actually hearing his voice, I could envision him sounding pretty damn creepy in my head. So kudos to Jeff for pulling that off and I wonder who they’d cast for a live action adaptation that would capture that creepy factor quite well? But as we read the kids’ interactions with him and his crew, it made me wonder… Whose the more worrisome of the two? Victor? Or his crew?

The crew seemed less inclined to want to hurt the kids but Victor seemed to not care as much. Yeah, he’s an AI but still. And with this book, we’ve only really seen one perspective where the Separatists are concerned and I’m curious to see things from their perspective if Jeff and Gabriel do choose to do more here. And I hope they do as I would love to see what Lilly, Isaac, and the rest of the gang are up too, especially given some of the comments Isaac made where Lilly’s concerned. And if Steve Wands is along for the ride of more Sentient, even better! I also have to add in that it was interesting to witness not only how the kids handled things, but how Valerie was able to handle things despite being limited in certain ways and being able to over come those limitations to certain degrees.

Editor’s Note: Wanting to read this tale of survival in space for yourself? Then head right here to grab yourself a copy!

Summary: When an attack kills the adults on a colony ship, the on-board A.I. VALARIE must help the ship’s children survive. But as they are pursued by dangerous forces through space, can VALARIE rise to the task and save these children?