Among the world’s first Comic Books ever written, Westerns were on the top of the list, and part of the most popular stories ever published. Fictional Heroes we remember like Zorro and The Lone Ranger remain to be as loved now as they were over a hundred years ago. So it’s not uncommon to see newer versions of Western heroes today that fit a possibly more modern influence like Marvel’s Kid Colt and DC’s Jonah Hex. The first issue of Savage Bastards introduces us to some interesting characters in a world during the late 1800’s Western Civilization.

Guanajuato, Mexico 1873, enter Rose, a woman on the run from a past she’d love to forget. As her story begins to unfold, we get introduced to more characters and key players at the turn of every page. One thing I noticed and appreciated immediately about this first issue is that it has parts of the story taking place in different areas of the American Wild West. We meet our unlikely heroes in Texas, and find out that this stimulating tale has a powerful enemy located in in the “Red Sands” Territory of Arizona. At first glace, this comic book seems to have a very familiar theme in the sense of outlaws, cowboys, freed slaves, bandits, bounty hunters, and bar fights. But, as you read further into the story, you will find an interesting twist that turns everything upside down. Our heroes are in an uphill battle as well as a race against time with everything on the line.

Now because this review is based on the first issue of a 20+ page comic book, there isn’t too much that I can say without giving away some of the surprising aspects of this story. My reviews try their best to not give away spoilers. The goal is to enlighten or educate based on editorial opinion in regards to potential great content to check out.

I am a huge fan of the classic “Spaghetti Western” Genre for film and television. I grew up watching Clint Eastwood films, or Bonanza and the Rifleman on TV with my grandmother. And yes, I love some of the modern films like Django Unchained, and the remake of The Magnificent Seven. Having a soft spot for this industry, I love to see a lot, but I don’t personally love everything I see. Savage Bastards is on the road to a great successful run as long as each issue continues to maintain this level of Subtext and Character Depth within each coming issue. This is a story that goes beyond your classic tales from the West, and I hope you will enjoy it as much as I do.

Summary: Savage Bastards is a story of brotherhood, revenge, and betrayal. Set in the 1860s, follow half brothers, Sam and Elliot, as they fight across a series of satellite towns in the Sonoran Desert in order to save Elliot’s mother from their sadistic, sociopath of a father, Darragh MacDougal and the rest of his crazy bastard children. 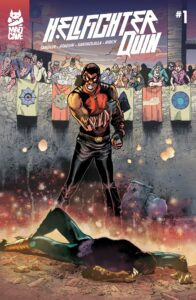 Summary: Quinlan Jones, AKA the Hellfighter, thought he’d hung up his mask for good. That all changed when Harlem’s own vigilante is forced into a tournament controlled by hidden clans to gain control over the Azure Sun; a mystical stone that provides abilities to those who come into contact with it. Here, Quin will fight for his life in a series of brutal contests against assassins, cyborgs, and other beings of unimaginable power. Alliances are formed and bones will be broken, but no matter what happens, only one may claim the Azure Sun!

When it comes to the relationship between heroes and villains of any genre, there is always a battle of high-risk proportions. In every story, the good guy must win the fight against the bad guy. And as old as this cliché may seem, it’s “the why” they fight or “the what” they are fighting for that makes any story unique and intriguing. Our history of Human Civilization is filled with wars for land, power and wealth, but thanks to the imagination of those who create our greatest comic books, we get to be treated to stories that go way beyond natural comprehension. HellFighter Quin takes Combat Tournaments to a whole new level, where the outcomes are far more important than winning any trophy, medal, or championship title belt.

Quinlan Jones is a famous retired vigilante in his local neighborhood. He found comfort in his new “Ex-Hero” life by becoming a simple Boxing Coach and Role Model to the youth of his town. Unfortunately, all that wonderful peace is quickly interrupted when his partner informs him of what was seen on TV taking place on the evening news. These events prompted our hero to reconsider his retirement, and take immediate action towards finding a quick resolution. However, what was hoped to be a small situation with an easy fix, sadly turns into a long and arduous adventure.

The story of HellFighter Quin is like a combination of Mortal Kombat meets The Infinity War. The good news is that this Comic Book is no rip off. It is a great original story with original characters and costumes in a unique world that opens doors for a never-ending conflict of engaging encounters between heroes and villains. In the first page, you receive a great logline or quick treatment as to what this story is all about. In other words, if you were searching for something to watch on Netflix based of the “show’s description”, once you’ve landed here on HellFighter Quin, you will be instantly hooked. This story has “Binge Worthy” written all over it, and I already can’t wait to read the second installment.

Here at IndieComix.Net, we are always looking to bring you the best in anything Pop Culture. Our mission is to grow an army of the world’s most awesome individuals. Please feel free to join us simply by remembering to LIKE, SHARE, COMMENT, SUBSCRIBE, AND SEND IN YOUR REQUESTS! We want to here from you so that we know the best ways to entertain you, the best fans this crazy Internet has to offer.