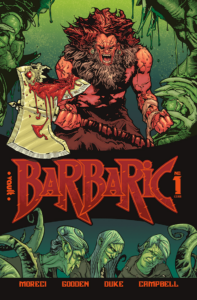 When I heard about Vault’s newest title known as Barbaric courtesy of Twitter, I just knew I had to check it out. Especially considering the fact Owen’s axe is a blood thirsty sentient being! Which kinda makes me think of a certain staff from the Conan: Exiles video game, only not as blood thirsty. And while this is clearly a nod/homage to Barbarian films like Conan, Michael Moreci’s clearly not going full tilt into that thanks to the fact he’s putting his own spin on things by adding a comedic element to the whole thing. Some might groan at that but not I as I think its fun and helps put this book more out there. Though I do have to wonder if the Awakened Staff of the Triumvirate from Conan: Exiles was an inspiration for the axe in this book that Owen has. And a little bit of the dialogue in the early pages oddly enough makes me think of Insane Clown Posse’s ‘My Axe’ song and not in a bad way either. I like that Owen is reluctant to be a save the day type, especially considering the reason he’s doing it to begin with.

Though why it was forced on him isn’t exactly revealed other than it being linked to something larger and I look forward to finding out the reason when the time comes. I’m also curious if they had something to do with his axe gaining sentience and I have to say I love the relationship between the two. That just about no one can actually hear the axe talk aside from Owen is an amusing twist and has likely given Owen a headache in more ways than one on any number of occasions. And with things heating up at the end, including a team up, I can’t wait to see what Michael has in store next! So stay on the look out for this upcoming Vault offering in June!

Summary: Owen the Barbarian has been cursed to do good with what remains of his life. His bloodthirsty weapon, Axe, has become his moral compass with a drinking problem. Together they wander the realm, foredoomed to help any who seek assistance. But there is one thing Owen hates more than a life with rules: Witches.

Welcome to the skull-cracking, blood-splattering, mayhem-loving comic brave enough to ask: How can a man sworn to do good do so much violence? Hah! F***ing with you. It’s just…BARBARIC.