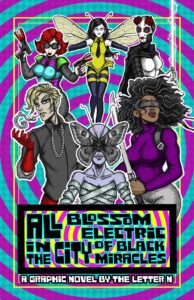 I’ve read some titles over the years that were pretty weird but I have to say, ABEITCOBM is perhaps the weirdest of all at 192 pages. This book has Magic Users, Demons, Robotic Generals from Hell, Assassins, Power Ranger homages, Alternate Realities, and over all… discussions that either go over your head, give you a headache, or make you question everything around you. Or perhaps all three and it took me a few hours to read through the whole thing. Not because of the amount of pages but because of those discussions. Oh, and I can’t forget about the black book that everyone and their gigantic eye is after for one reason or another. The whole thing makes me wonder if N was on something when he (she?) came up with this idea and I now understand why some think I tend to be on something with a few ideas I’ve done for fanfics. Now I mean no offense when I wonder if he’s (she?) on something by the way or if they just really dug into the really crazy part of Creating and decided to let loose. Which is always fun to do and at the center of all this madness is New York and generally its last hours/days as things come to a head. Brought in part to you by 9 representatives of what is known as the Holocaustic (name possibly being triggering for some as well for that matter) Constants.

All of whom are vastly different to the other, such as Blue, who looks more green to me and is a part of the Power Ranger homage squad known as Spectrum Squadron Zero. Mu, a pop sensation with a hunger for flesh and gains power through all the idolization she gets from her fans. Which comes in handy for her hungry ass self near the end of the story and I have to feel sorry for that fella and his pals. Then there’s the Librarian, who is wordy as Hell and quite experienced with word magic and there seems to be a mystery involving his sister but that’s never fully explored due to everything else going on in the story. He himself is after the black book, if only so he can end existence as it is since he seems to rather despise it. And perhaps himself for that matter as well. Doctor Hologram is another of the 9 and this guy is cunning, massively intelligent enough to have split himself into three separate versions of himself that exist on three alternate realities, and rather vicious when he needs to be. He also seems to have the winning hand towards the end of the story but I’ll touch on that in a bit. And with a name like his, you wouldn’t think he’d be taken all that seriously, but well, he definitely is one you should take seriously. Up next, we have the Moth Girl. 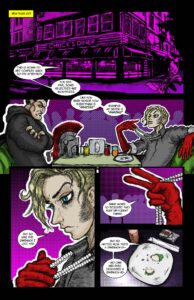 Someone (or would that be someTHING?) who pretty much hates Humanity and wouldn’t hesitate to gut you and then go get Ice Cream. Or something close to it anyway! She also may have something of a fucked up history with Mr. Blue but whether its actually her or Moth Girl just has the unfortunate luck of being similar to Blue’s special friend is up for debate. Isabella Jones is one of the two main assassins we see in this book and is African American, blind, telepathic, kickass, and thankfully not all that much of a cliché. She also tried to take out a certain figure we all had to deal with for 4 years but the fabric of reality and other sources had other ideas. Jones also can’t really speak aloud but when she does, let’s just say you’re gonna want to be somewhere else! The Redheaded vision and fellow assassin Abby St. Claire by the end of this book probably regrets getting out of bed, let alone accepting a contract from Jones due to the sheer insanity that develops where a certain black book is concerned. I’m looking forward to seeing how things go for her and Jones in the future as they search out a few problematic things that’s screwing with the fabric of reality. And maybe even taking out other News Media Corporations in the process!

Stella Telenovela, a name I honestly love and is a general of Hell, is someone I find to perhaps be the most tragic of the characters we see in this book. Not only is she the last of a special breed of warrior from Hell but she can’t die thanks in part to what fuels her robotic body. A stolen piece of Heaven’s light and I’m curious to know just how angry that made the Heavenly Choir when that happened. If they are even aware it happened for that matter. She’s also apparently partly responsible for certain Religious Hispanic icons looks wise and despite what life’s done to her, Stella’s damned smart. I’d happily read more stories involving her for that matter as well. Last but not least, is Ms. Metro. A character we don’t know much about or see much of through out the story except in very small doses here and there. We only know that she’s a well known Super Hero who vanished for whatever reason and how she ends up with the 5 Starspawn is something I can’t wait to read more about. The 5 are a group that represent certain aspects of reality and are the authors of the black book. Or rather, the Black Bible I should say. 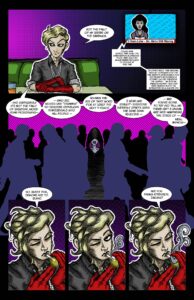 They are the Seer, the Mathematician, the Poet, the Engineer, and the Muse. And according to Doctor Hologram and what we see of them in the last pages of book 1, they are beyond any Earthly horrors we could conceive of.mAnd after seeing them for myself, I’m inclined to not want to be anywhere near them in a dark alley! I love the nods and homages to various things in this book and that at least in this reality, there aren’t any true heroes. Just people being people and being pretty awful at times as Humans can be and perhaps making Demons and the like look tame in comparison. I love that N is exploring the concept of too much belief in one thing can fuel some troublesome things to happen and that no matter what you try, you just can’t escape your fate in Stella’s case and perhaps even in Blue’s case as well.

Hologram evidently suffers from knowing too much thanks to his particular situation and that’s why he’s gone to the troubles he has to ensure he’s the one with the Black Bible in hand at the expense of thousands of lives in New York. And, he’s also got that vicious thing down so there’s that and like I said earlier, he seems to think he has the upper hand by the end of the story. But the surprise twist at the end looks to make that not be the case! So if you’re looking to check out something that’s balls to the walls wildly weird, All Blossom Electric will be for you!

Editor’s Note: Interested in checking out the absurdity for yourself where All Blossom Electric is concerned? Folks can grab a copy at ComiXology or over on N’s website where you can grab a print copy if digital isn’t to your fancy!

All Blossom Electric In The City Of Black Miracles Book 1
Murder Cult Manufacture
Writer and Artist: The Letter N
Colorist: The Letter I
Reviewer: Rob Wrecks

Summary: This is not a tale of hope. There are no heroes. And everyone is awful.

24 villains were responsible for the destruction of earth. This is probably the story of at least 7 of them.

The blind samurai who attempts to kill the president. The wizard librarian’s mad pursuit of doomsday. The middle-aged mercenary and her demonic debts. The Moth Monster and its hatred for the human race. The J-Pop Idol with the cannibal appetite. The Doctor who exists in parallel worlds simultaneously. The suicidal general of hell’s robot legion.

These are the absurd series of events that brings all of them into the same city on the same day and how it led to the destruction of that city.