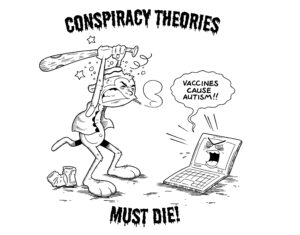 May 4, 2021, (TAOS, NM) — Get set. One seriously maniacal monkey is about to be unleashed on the unsuspecting public! On May 5th, weekly installments of Mr. Butterchips by Alex Schumacher (The Unemployment Adventures of Aqualung, Defiling the Literati), will launch on SLG Publishing, accompanied by new apparel to help fans show their love for the celebrated curmudgeonly capuchin.

Mr. Butterchips illustrates the day-to-day antics of a prickly organ grinder’s monkey set in a surreal fictional West Coast town, which is populated by an array of quirky characters. It’s through this satirical hallucinogenic lens that the pitfalls of a “gig economy” are examined, while touching on such timely issues as class disparity and intolerance; amplifying the absurdity of what it means to be alive in a world which seemingly becomes more insane by the second. 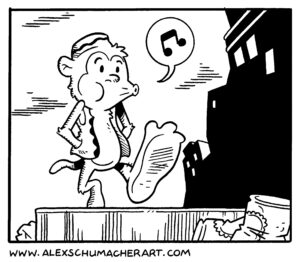 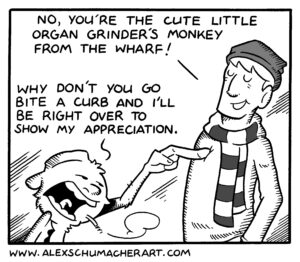 “When offered the opportunity by SLG Publishing, I decided to retrofit Mr. Butterchips for a new era and a broader audience,” said Alex Schumacher. “While the comic will now be set in the hallucinogenic fictional town of Los Puritanos, readers who enjoyed the salty simian’s tenure at Drunk Monkeys Magazine will be pleased to know his low threshold for stupidity and intolerance remains wholly intact.” 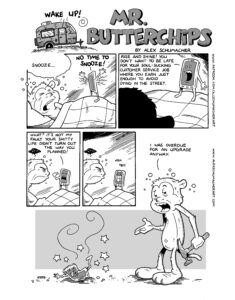 The comic first appeared in the online literary magazine Drunk Monkeys beginning in April of 2016. SLG Publishing released Mr. Butterchips: A Collection of Cantankerous Commentary in 2020, assembling the initial run of the webcomic along with a 22-page standalone acid trip of a story entitled “Psychotropic San Francisco Sojourn.”