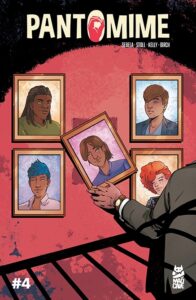 Its been a bit since the first issue of Pantomine came out and the story has moved right along, continuing to be enjoyable and a little wide eyed shocking here and there. Not to mention the creative team remaining the same as the story goes along. Issue three saw Haley, Max, and friends finally get one over the Manager and that was just beautiful to see. Especially after everything the man and his muscle put the kids through up until that point. Which… Makes you think its all over with. That these kids are gonna get to go on with their lives and be as happy as they can and all that good fun stuff. Its the way things should go, right? Well… As of issue 4, it looks something like that but at the same time, these (now grown up for the most part) kids clearly haven’t learned their lesson where crime is concerned. And that’s… Pretty darned disappointing in my view. Though I do like the fact that this doubles as not only as a transition to the next portion of the story, but also as a way for us to see these kids a little older in life.

A chance to see where they are now where life and College is concerned and how they’ve managed to stay great friends with one another. Its a good look, even if it is a little disappointing considering that not so learned lesson I mentioned before. Max especially seems to be headed down a bad path given the way he acts and how worried/concerned Haley is getting about him even as she is more or less wanting to get some distance from him. Not because she’s tired of his nonsense or anything like that, but just that she’s ready for a break and to be free of things that still haunt her. I will admit I am liking the look Max has now that you occasionally see Japanese Gangsters use in certain forms of Media. Though I’m mostly thinking of Kuwabara from Yu Yu Hakusho and I wonder if its a homage or just something Christopher Sebela and David Stoll wanted to do. David’s art and Dearbhla Kelly’s colors still go fantastic together in my view as well. Haley’s relationship with Kestrel is also something I really liked seeing in this issue.

Its something I really hope survives by the final issue of this story, not to mention finally learning that certain lesson and putting a stop to their criminal activities for good. Things as we see at the end, end on a bad note. Not just because of a job gone wrong, but also because of an unwanted visitor from the past who shows up. One I’m wondering if he might have had something to do with the most recent job going wrong. But regardless of that suspicion, his arrival means nothing good!

Summary: Years pass. Kids grow up. Lives move on. But it’s hard to move on from your dark past when it’s still so much fun. Our teen criminals have scattered since graduating from Wayfair, trying to find their way as young adults, but they still come together for summers filled with crime. They haven’t been close to getting caught, but how long will that last?