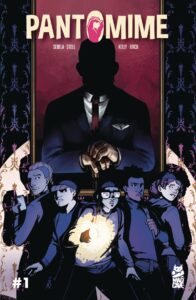 Mad Cave Studios… A group whom since coming on to the scene a few years ago has yet to disappoint. Led by the one and only duo of Laura Chacon and Mark London. The Cave Crew has slowly been making a name for themselves as they also expand their circle of talent and dip their pens into various Genres. And their most recent offering from them is Pantomine, which is out November 4th. Pantomine is the story of two siblings, Haley and her brother Max. Whom not only just recently lost their mother to Death’s Embrace and are now having to go to a special school known as Wayfair Academy, but both are also Deaf. Which, for me personally, is the second time in the last 7 (8?) years since I started IndieComiX that I’ve seen a book have a focus on the Deaf Community and the use of Sign Language to speak (with) to those who are and aren’t Deaf.

Its great to see and makes for an interesting challenge for not only the reader but the writer (Christopher Sebela) and even the artist (David Stoll) as well. Bringing on Jamie Vander Clute as a Diversity Reader for this book was a smart decision and makes things feel even more real when it comes to the aspects this book has. And though there’s two main characters here, we primarily ‘hear’ from Haley via her thoughts as she and her brother deal with things like their mother’s death, her funeral, and her so called family. In addition to their new lives at Wayfair Academy, which as I mentioned earlier, is a very special school since it helps those like Haley and her brother have somewhere to live and get their education in a way that’s actually helpful for them. Now its unclear which is the oldest of the two but that’s okay, as brothers don’t necessarily have to be the older to want to protect their sister(s).

Now once they are at Wayfair, we get to see a variety of characters who gradually become the siblings’ friends and its great to see all this play out. Though part of me did expect a bit of drama via a struggle to fit in or something to that effect but the lack of that was actually nice. Albeit, there is a bit of drama but that’s what sets things up and it all starts with Max’s phone getting taken from him by a teacher. And what they do where that’s concerned helps embolden them on another decision sometime later and if they all survive the fallout from that, Haley will have learned a very valuable lesson. But that, and the events of this book goes to show that just because kids like Haley and Max, along with adults are Deaf, doesn’t mean they aren’t capable. As they definitely can be and its a great thing to witness here. I can’t wait to see where things go from here after the cliffhanger we got at the end of this first issue as good intentions (even if slightly misguided) can have some drawbacks.

Will Haley and her brother have to pull a job to make up for what happened in the first issue? Will they end up kicked out of Wayfair? Only Christopher Sebela, David Stoll, Dearbhla Kelly, Justin Birch, Chris Sanchez, and Jamie Vander Clute know those answers! This’ll also serve as a lesson on how to ensure there aren’t things like cameras possibly recording your every move as well! Though its unclear at the moment if that’s what got our crew here into the mess they’ve unfortunately found themselves in. So with that said, folks… Don’t sleep on this book when the time comes for its release into the world. Hell, just don’t sleep on Mad Cave period!

Summary: Haley and her brother, Max, are alone after their mother’s death and are sent to Wayfair Academy, a special needs boarding school. Eventually, they find family amongst other deaf children. One night the group decides to dip their toes into crime… the thrill is too much to leave behind. They soon find out that stealing from the wrong person, has its consequences. With no one to turn to but each other, they must make a choice, one where no one comes out the same.