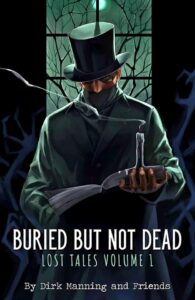 Cover illustration by Jan Apple (And yes, you can get a print of it as a free Stretch Goal!)

With it all but a foregone conclusion that we’re not going to have any in-person comic cons for the rest of 2020, I want to offer you all a chance to not only get a new graphic novel, but also pick-up some that you normally would have to fill out your collection (or perhaps for some friends for holiday presents), and that’s the intent behind this 15-day “Quickstarter” campaign for my new book BURIED BUT NOT DEAD: Lost Tales Volume 1.

This is an “all-thrills, no frills” campaign: $20 will get you the new graphic novel with FREE SHIPPING in the continental United States, and I’m also offering copies of Nightmare World, Tales of Mr. Rhee, Hope, Love Stories (to Die For), and the three-time Ringo Award-nominated Haunted High-Ons at discounted convention prices (or cheaper) also with FREE SHIPPING.

If that’s all you need to know, you can secure your copy of BURIED BUT NOT DEAD and add-on any other of my graphic novels you’d like HERE.

About Buried But Not Dead…

Along with writing long-form comic series such as Nightmare World, Tales of Mr. Rhee, Love Stories (to Die For), Hope, and Haunted High-Ons (which, again, was just nominated for three prestigious Ringo Awards — including “Best Humor Comic of 2020“), over the years I’ve also had the privilege to collaborate with a number of talented artists to contribute short stories to various comic anthologies.

Six stories, now collected together in one graphic novel for the first time with additional bonus content! There are no immediate plans for this book to be available in stores — so get yours here while you can!

However, with the passage of time most of these anthologies have gone out of print, been lost to the ages, or otherwise become extremely expensive in the secondary market.

My artistic collaborators and I remain very proud of these stories, though, and have yearned to make them available to all of you again… so that’s what we’re doing with this new book release: BURIED BUT NOT DEAD: Lost Tales Volume 1.

The six stories in BURIED BUT NOT DEAD run the gamut from horror to heartfelt and sci-fi to suspense, resulting in a collection of stories that will tug at your heartstrings… and then promptly rip them right out of your chest!

Editor’s Note: Currently, Buried But Not Dead has reached its 3,333 dollar goal with 92 backers and 15 days left to still go. If you haven’t yet, head to the Kickstarter and make a pledge tonight to grab yourself a copy! In addition to several other great Dirk Manning reads!