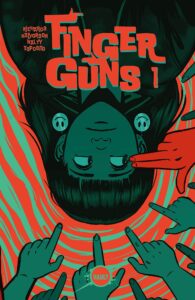 Finger guns, we’ve all used them through out our lives. Whether for fun and games or otherwise, we’ve used them. Briefly imagining them shooting some kind of ammo from them for said fun and games or to try and be intimidating. The Anime known as ‘Yu Yu Hakusho’ back in the day used the concept of the finger gun to great affect where the spirit move known as the ‘Spirit Gun’ is concerned and to see how finger guns are used in this offering from Vault is pretty interesting to read about. And yes, I know I’m a day late and a dollar short on this but oh well! Our lead (well, one of them anyway) teenager known as Wes unexpectedly discovers he can cause people to do things when he shoots finger bullets at them. Naturally, there’s no way he can resist such a thing and has fun with the whole thing and given his home life, its easy to see why he could use a distraction or two.

Even if it is impolite! Yet he soon discovers he’s not alone as fellow teen known as Sadie can do the same thing. Who also clearly needs a distraction or two in her life like him! Although, where he’s the wild fire, she’s the soothing rain and calm where her finger guns are concerned. Things are kinda slow here with this first issue, but that’s okay as Justin Richards and crew are setting things up and you can’t have much of a story if you don’t set things up all proper and the like. We get to see the two kids do a little experimenting with their gifts and how it affects them and I’m curious to see if there’ll be more of that in later issues. I’m also curious to see how they were able to gain these abilities and if they are the only ones who can do the things they can with their finger guns.

I’ve definitely got some catching up to do in my reading of this title from Vault but it’ll be worth it! Currently, Finger Guns has 4 issues out and are available in your local comic shops! But if not, see if they can order or visit the Vault or ComiXology websites to be on the safe side!