David, David Pepose That Is 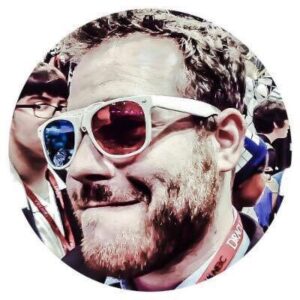 Since making the jump to comics and putting out the first issue of Spencer and Locke in 2017 through Action Lab’s Danger Zone, David Pepose has been making quite the name for himself in the world of comics. And this guy? This guy that I just mentioned? Who has also been Ringo nominated several times? He’s clearly got a damn good knack for it and making the switch was definitely the smart choice in my view. He mixes the serious with the not so serious in just the right places and I absolutely love it. Now, I’ve only read a little here and there over the years so I’ve never really had the full blown experience of reading his work. At least… Until tonight that is. When I finally sat down after a fun night at work and read all of what he’s done since 2017 aside from Scout’s Honor, The Nightmare Theater Anthology, and Grand Theft Astro as I have yet (though I will eventually!) to check those out.

And I have to say, Going To The Chapel had me laughing a great deal and I don’t think that’s happened with a comic since BOOM! put out Fiction Squad a few years back. But more on that in just a minute or two!

Er, that is, for Going To The Chapel, not Fiction Squad!

Summary for Volume 1: Spencer & Locke follows hard-boiled Detective Locke as he investigates a brutal murder with the strangest of partners ― his imaginary talking panther, Spencer. But when they face brutal gunfights, deadly car chases and memories of Locke’s traumatic upbringing, can this unlikely pair survive long enough to find the truth? 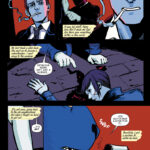 Summary for Volume 2: Named one of Barnes & Noble’s Best Graphic Novels of August 2019, the Ringo Award-nominated Spencer & Locke 2 finds Detective Locke under investigation from Internal Affairs, while his increasingly feral imaginary partner Spencer urges him to return to crime-fighting. But when a scarred soldier named Roach Riley returns home on a mission of violence and terror, will our hard-boiled heroes stop this madman’s rampage, or will their partnership be the latest casualty on Roach’s hit list? For fans of The Dark Knight, Taxi Driver, and The Empire Strikes Back.

Detective Locke’s story isn’t a happy one, from his childhood to adulthood, its been rough going for the guy with a long time imaginary friend in the form of a talking Panther by the name of Spencer. And considering he’s a strong candidate for hours of therapy, I have to wonder how he managed to join the Police Force. Especially as he doesn’t even hide the fact he talks to Spencer as he goes about life and solving crimes. One involving an old love of his who left him someone very special and is just as awesome as he is considering how she tries to handle things where a certain Roach is concerned in the second volume! Spencer and Locke is a rare example of a story where there just isn’t a happy ending for the good guy and it makes you feel a great deal for them more than what you already do. Kudos to David for actually going this route and if there’s more to come for Locke considering the end of volume 2, I am eager to read it as it’ll be interesting to see where things go for the Detective after all was said and done.

I also have to say that despite how screwed up Roach Riley is thanks to life and certain manipulations, he’s not completely screwed up considering a certain scene he shares with Locke’s kid. 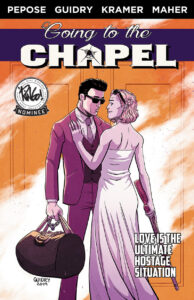 Summary: What if Die Hard got hitched to Wedding Crashers? Find out in Going to the Chapel, the Ringo Award-nominated romantic crime comedy that follows Emily, a wealthy bride-to-be with a serious case of cold feet. But before she can spill the beans, her wedding is hijacked by the Bad Elvis Gang, a notorious group of bank robbers on the prowl for a million-dollar necklace on loan for the event. Yet when this smash-and-grab devolves into a standoff with the police, Emily must become the unlikely ringleader of her own hostage situation to discover her true happily ever after. For fans of Quentin Tarantino, Arrested Development, and Ocean’s Eleven.

Like I mentioned earlier, Going To The Chapel had me laughing quite a bit through out the story and its clear to me that David had obviously had a lot of fun writing the story. Its not quite as super serious and on the worrisome edge of your seat as Spencer and Locke is, but it definitely has its serious moments. I mean… Holding a wedding hostage? That’s pretty damned wild yo! I thought things were gonna be interesting after I read the first issue back in 2019 but wow, I had no idea just how right I’d be! And Pyro Girl? I’d definitely say she’s still someone to watch out for after the craziness of events in this story! Having read this in its completed form makes me wonder how well it’d translate to a small or big screen adaptation and who all would get cast for it. But that’s a potential article idea for later down the road. This was a fun adventure to read, and one that ultimately helped Emily out a great deal where her future was concerned. 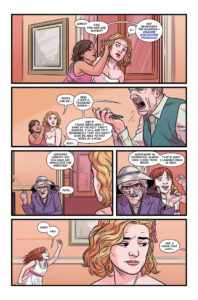 Though I have to admit, I was honestly expecting things to go another way given certain things. Also… Grandma Harriett STILL kicks ass! 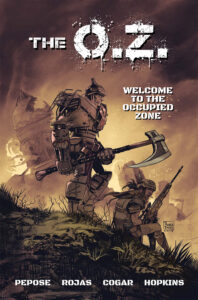 Summary: Returning to Kickstarter in 2021 with writer David Pepose and artist Ruben Rojas, The O.Z. is the story of disillusioned Iraq war veteran Dorothy Gale, who is plucked from the fields of Kansas and dropped into the otherworldly battlefield of OZ. Navigating between bloody factions led by her fabled grandmother’s former friends, Dorothy will have to overcome her own doubts and fears if she hopes to bring peace to the Occupied Zone.

The O.Z. is an interesting take on the future of the Wizard of OZ after all was said and done and its a take I am rather liking. Heck, by the end of the first issue I was practically vibrating with sheer enjoyment of what I had just finished reading and now I’m really wanting more. This book is also more serious than anything given certain intentions Dorothy has at one point before finding herself in the war torn land of OZ. Of course, this isn’t the same Dorothy we’ve all known of for years, but rather Dorothy’s adopted granddaughter who is named Dorothy. Dorothy and Dorothy: the Thys of OZ! Attorneys of Thys. Ahem Anyway! This Dorothy is a lot different than Grandma Dorothy, namely having served in the Armed Forces for one. And this having left quite the impact on her that honestly breaks your heart considering those intentions of her’s I mentioned previously. Of course, as we end up seeing, life has other plans. 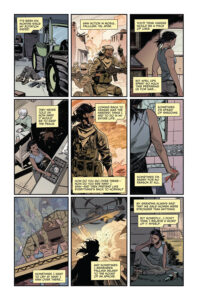 Like being recruited for the war in OZ for example and coming across a shock or two. I have to say though, I think the Scarecrow could have benefitted from having a heart just as much as having a brain. Might have kept him from going down certain paths! I love this story, I love that Dorothy essentially finally finds a new path for herself, even if it does involve quite a bit of the old one. I can’t wait to see what happens next in this take on things from David. Though I do kinda feel that Dorothy’s reaction to everything OZ is a little underwhelming, as even for a Soldier, you’d think there’d be some alarmed freaked outness. But hey, that’s just me though! Now, granted, that could still happen later in the story as things go on but only David himself knows the answer to that.

The time of Pepose is definitely upon us, folks. This man is delivering solid work and intends to continue to do so with some named projects of his that are lined up for the future. And I for one am excited to read them when the time comes. What’s behind the source of his excellent writing is a mystery and whether its a wish granting Genie or otherwise, I think we can all be thankful we’re getting to experience David’s most excellent writing skills!

Editor’s Note: To find out where you can check out David’s work and stay up to date on future projects of his, head here for all his links!