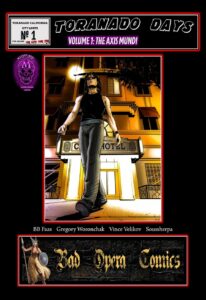 Although the majority of the world is in love with the entire infamous “John Wick” movie series, there are still a few critics out there that can find a fault with any of the four installments, especially the inaugural 2014 film. The most common complaint is that the first half of “John Wick 1” was too slow. Some will argue that the director took too long telling the story in the opening act. But I think it was a genius move, because it kept the audience intrigued and built an internal emotional bond with the lead character and his dog. A little bit of the same can be said about the first issue of “Toranado Days”, and how our lead character Tristan was introduced.

4th of July weekend in L.A. 1993, we open with a young adult male, listening to music through his headphones, preparing some form of drugs, whether prescription or not. Interested yet? We soon find out that this character named Tristan has been deemed the responsibility of caring for his sick and dimensional mother. Among his list of responsibilities, is working the late night shifts at a convenience store. He seems to be liked and trusted by his boss, as he is left without supervision in charge of the store and stocking new products. On his way to work, Tristan stops at what looks like an antique store, and has a very strange run in with the shopkeeper. This encounter leads him through a dark and disturbing stroll down memory lane. The thoughts that transpired earlier in his day were hard to shake as he finished up his day at work, and went home for the night.

The bizarre and shocking twists of what happens next are all the rational you’ll need to check out his interesting tale in “Toranado Days.” Just when I thought things were getting boring, this story took a major U-turn into a direction you wouldn’t see coming. Based off of this initial book, I am hooked into knowing what is going to happen next. There are so many questions that now need answering. His past is a mystery, and the people involved are just as mysterious. What happened, and where will this story go? How will it all unfold? How many people are going to die? And what will the final outcome look like for Tristan and his crazy mother? All these answers and more are coming in the next issue of “Toranado Days” chapter 2 entitled “What’s in the bag”, and I hope you will get as excited to read it as I did after checking out this first installment.