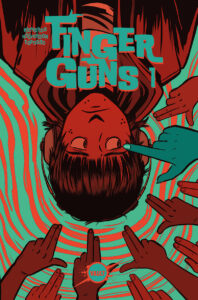 A new series from Vault Comics, Finger Guns packs a fun yet highly emotional punch like no other. Wes and Sadie are two broken teenagers from two different types of broken homes that are mysteriously given the ability to control other’s emotions for a short time with the use of their fingers. One finger = Calming a person down. Two fingers = Making them rage in anger.

The effects aren’t permanent, but the lives these two find themselves living sure seem to feel that way.

It’s a neat concept that has a lot to offer and Richards through their writing really pulls the rug out from under us slowly as we move through the unraveling of Wes’ lack of connection with his father who’s never home, to discovering his powers and having a grand time with them, to meeting Sadie and having to feel what the effects of those powers feel like, and then finding out Sadie’s home life is filled with an even more terrifying scenario.

Through their art, Val Halvorson is able to show these moments with exceeding grace and emotion. The page that still creeps into my mind the most as I write this is the unnerving looks on Sadie’s mother’s face as she tries to calm her abusive husband down. Her terror is right in your face and you can’t look away. And a page before that Sadie is confronted by her terrified mother and angry father, both in their own ways representing the two sides of these two kid’s abilities.

Images unfortunately relatable to millions of people across the world and Halvorson is able to make them the absolute cornerstone of the issue. And as the issue comes to a close, we’re met with an undeniable truth: How are these kids going to use these new powers to fix their current situations when the effects aren’t permanent? And was that even why they were given these powers in the first place?

I truly enjoyed issue #1 as it does an incredible job at giving us a fun setup with an all too real emotional hook to continue reading the series. Both Wes and Sadie feel very real and relatable, they’re not annoying or perfect, both have very distinct personalities, and separate ways of responding to situations. In only 30 pages we’re given two fully rounded characters and worlds of which they inhabit.

The lettering is incredibly easy to follow, and the coloring has this flattened texture feel to it that I quite enjoy for this book. Almost as if there should be a sort of slight bubbled feel to the page when you touch it. Finger Guns has a great creative team and I’m very much looking forward to where the series goes next from here.