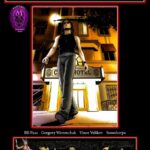 Although the majority of the world is in love with the entire infamous “John Wick” movie series, there are still a few critics out there that can find a fault with any of the four installments, especially the inaugural 2014 film. The most common complaint is that the first half of “John Wick 1” was […]