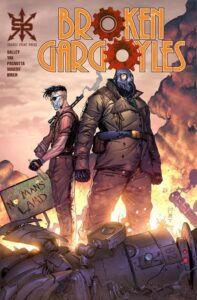 For months now (a year really), Bob Salley has posted artwork for a title he and Stan Yak have been working on known as Broken Gargoyles. And to my knowledge, not exactly saying what the book is about but I could be wrong on that and that’s my own fault for not looking better if that’s the case. But when Bob offered up a chance on Twitter for folks like myself to finally have an opportunity to check out Broken Gargoyles, I just couldn’t pass up on the opportunity. For the curiousity about this book just had to be dealt with and dealt with it was! Now, as I read this, not knowing anything beforehand made this something of a challenge and a joy to read. A challenge because I wasn’t sure of what was what given that there’s no flashbacks or a lot of explanations as you pretty much have to read to find out things. And a joy because well, I went into this completely blind and didn’t feel lost. Getting to learn as I read through to the end of the first issue.

We’ve got the time period of the mid 1920’s, part of the era between the first World War and the second World War. When life was a little on the difficult side for some of those who had fought for America in WW1 and had to deal with various things once they came home. Fitting in, finding jobs, and various other things. One of those unfortunately being exploited by pieces of garbage who think they can make money off of some of these men who had fought for America and were wounded in any number of ways. Essentially reflecting the state of things in today’s time to one degree or another with those who served America but with a little improvement at least. One such character is William, a man with a family, job struggles, and visible wounds on him. Most especially on his face. Though how bad it is is remains to be clear due to the fact he wears a mask.

Another character who served is the man in the gas mask known as Commander Douglas Prescott. We don’t know what he looks like but we do know his motivation is to bring forth a firm reminder that he and his of the 117th Infantry Regiment are still HERE. And is willing to do what he has to do in order to ensure that sticks in the minds of many with the help of others. Along with possibly an escaped prisoner named Ben. Who has a story I’m honestly curious about as in his words… ‘Not all convicts are murderers’. Which is damned true for that matter. Naturally, as the Commander and his allies ensure word gets out about their work, you have those in a position of power willing to spin things in a negative light on their work in order to keep the heat off of them. Sucky but smart unfortunately. Bob and Stan both manage to respectively make you feel certain things as you read through to the end. A couple of those things being anger and disgust over how good men end up getting treated and misunderstood by others.

I love that Justin Birch is giving a very clear look and feel (identity essentially) to Prescott’s dialogue since he’s got a gas mask on instead of doing something that wouldn’t really differentiate it and thus unappealing. I’m looking forward to where Bob, Stan, and the team go with this title. Especially as its made clear our boy William and the good Commander have a history together. How that and Prescott’s goals with his mission to ensure the 117th is remembered, are things I am looking very forward to seeing play out. And if Robert Nugent and Marco Pagnotta are still serving as the colorists for this title, even better!

Editor’s Note: Broken Gargoyles #1 will be available for pre-order on the Source Point Press website on May 1st!

Summary: In an era after the first World War, soldiers like William struggle to find their place in society while one man seeks to ensure they aren’t forgotten.