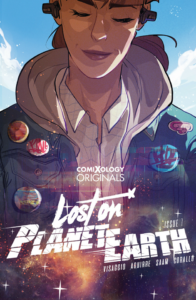 We all know what the ideal utopian society looks like: Conscription. War on Earth is gone, and humanity has looked to the stars and EVERYONE wants a shot at being a part of such exploration. At least everyone those stories generally focus on. Everyone seems to put in their time and that’s all we get of the story.

However, what of everyone else left behind in such a narrative? The people who DON’T want to be a part of the starfleet? Are they any less important members of that utopian society? What are they even doing with their time if not keeping up with the orderly pace of the new world?

That’s what Lost on Planet Earth is exploring in this all new mini-series and the opening issue feels all to real to the ones who tried so hard all their life at a single goal only to find out – usually at the last minute – that it’s just not what they want for their lives. That their utopian future they envisioned since being a little kid was just not for them.

Enter Basil Miranda who is the embodiment of most of us. She’s put the effort in and everyone recognizes just how far she’s going to go. But at the last second she gets an epiphany that maybe, just maybe, she doesn’t want to be a member of the interplanetary fleet (as it’s actually called in this book). In Magdalene’s bio in the back of the issue it says she wished to be a theologian but made the choice to leave all her schooling behind for a career in comics, and I have to wonder how much of herself she leaned into to tell Basil’s story. 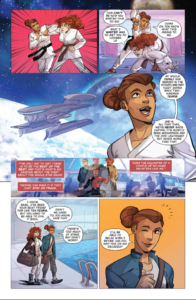 I can assume most of it as everything Basil is feeling feels all too real. She’s excited, haunted, upset, accepting, and the hopeful all in the span of a few pages and it all feels as if Magdalene is really pulling from her own experiences here. Keeping with the feel of a utopian society, however, is how everyone treats Basil in this book. There is very little in the way of confrontation or drama because everything Basil is dealing with is completely unto herself. 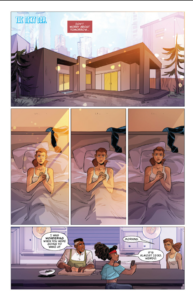 Her friends and family are extremely supportive of her in her training, and without knowing it her mom gives her the epiphany Basil needs to completely change her life – hopefully for the better. And when she runs from her test not once does anyone chide her for what many would perceive as a mistake. It’s okay. It’s… Utopian.

But that’s the real treat of the book. Basil’s story is front and center and it’s completely a battle within herself. In a utopian world, the only battles left should be within yourself. Now there’s most likely going to be outer confrontations of some kind in the coming issues, but for now I felt the writing kept it all really tight and felt very real even in moments where this society should denote otherwise. It’s impressive, really.

I would say my only real issues with the writing is maybe a little too much overwriting with the captions. I get needing to know just how much Basil puts into her training to be the best, but there were times it sort of felt like overkill. And the final page feels very abrupt for everything that led up to it. The story just… ends and it doesn’t vibe well with the rest of the book.

Claudia’s art is wonderful. She has a real since for different types of bodies and faces, as every character feels very unique in and of themselves even if they’re related, and Basil has very noticeable realistic muscles that are incredibly fitting for all the hard work she puts in. None of it is fetishized or pandering, Basil looks and acts real and it’s great. However, Claudia isn’t afraid to make everyone seem cartoony either when the opportunity to presents itself to overextend emotions. Speaking of, the emotional moments are rendered stunningly when they come up in the book. 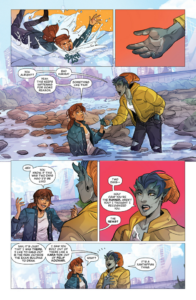 There are a few pages that stand out to me, but one in particular is a page where Basil is laying in bed thinking silently about her decision to leave fleet academy and it’s only three silent panels, but you can feel everything Basil is thinking just in her eyes and how her hands are positioned against her. Scrunched up close and filled with anxiety for her future. It’s something so many have felt and Claudia captures it perfectly.

I’m very excited to see where Lost on Planet Earth goes from here because it’s an incredibly unique, but also loaded scenario. It’ll be interesting to see just what life it like for those who feel lost and want perhaps a little more excitement in the world and what form that takes.

With their powers combined, they form DEATH RATTLE, an all-new creative group!

Summary: It’s 2381, and Basil Miranda, on the verge of graduation, knows exactly what she’s doing with the rest of her life and always has: a primo assignment on the best ship in the fleet alongside her best friend in the world. She has meticulously prepared herself, and the final Fleet Exam is tomorrow. But what if none of that is what she really wants? And why hasn’t she ever asked herself that before?